I Bit Into This Torta, Here's What Happened Next

Recently, a friend brought this unassuming food item to a little house party I was attending, and even though they were humbly sitting in the shadows of things like fancy cheeses, bottles upon bottles of booze, and an entire Momofuku Birthday Cake, they became the most coveted item on the table. Ines Rosales tortas (no relation that we know of to the Fox 5 traffic reporter) are now my go-to when going to an house apartment party, and given it's the season for that sort of thing, I thought I'd tell you about them. 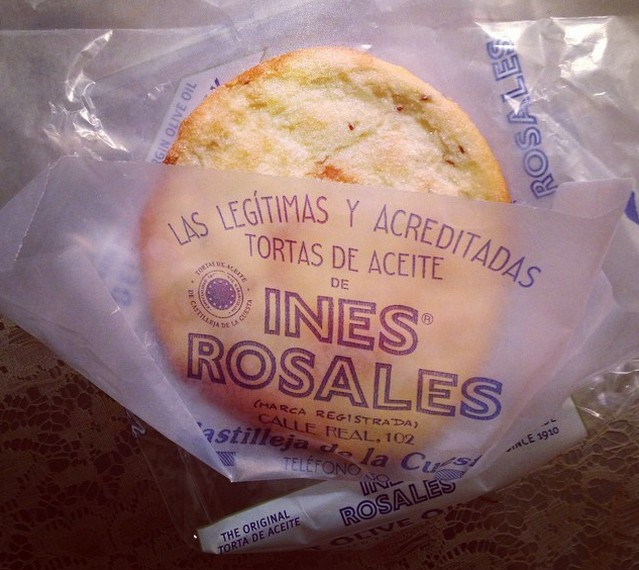 The first and only rule about Ines Rosales tortas is that you should never purchase them unless you are going to someone else's home with them. If you purchase them on your regular trip to the market and bring them into YOUR home, you will eat them for every meal until they are gone, eventually waking up from a food coma nap in a pile of crispy crumbs and sweet, sweet regret. These things are delicious but at 140 calories a (rather large!) piece you do not want to overdo it.

The tortas come in sweet and savory flavors, but even the sweet are sort of savory—the sweet flavors include Original, Seville Orange, and, Cinnamon. Savory flavors include Rosemary & Thyme and Sesame & Sea Salt. While usually "original" flavor means bland, but those are actually the best ones—delicious fact: they are 24% olive oil!

"In 1910, a woman named Ines Rosales began making olive oil tortas by hand and selling them at the train station in Seville, Spain. She used local ingredients, including extra virgin olive oil and unbleached wheat flour. Today, the tradition continues. Ines Rosales Tortas are still made by hand with the same recipe Ines Rosales created over one hundred years ago."

You can get them at Sahadi's in Brooklyn for around $6 (for six), and probably at a bunch of other places around the city. (They're also on Amazon for a little extra.)

#ines rosales
#tortas
#original
Do you know the scoop? Comment below or Send us a Tip