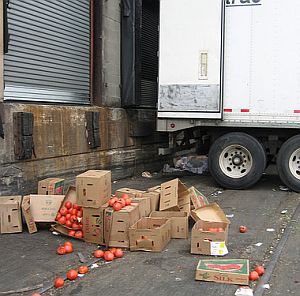 Vendors at the Hunts Point wholesale produce market, located on 125 acres of city-owned land in the South Bronx, have said they will consider leaving the site for points “north or west” because the city is not cooperating with their expansion needs. According to the AP, the market supplies 3.3 billion pounds of fruits and vegetables a year, mostly to restaurants and small grocers.

Matthew D’Arrigo, co-president of the produce cooperative, is frustrated because after eight years of talking with the city, the Economic Development Corporation is reluctant to commit to a proposed $450 million expansion. The Times reports that the four warehouses currently in use, each measuring a third of a mile long, are too small to handle the huge volume of trade and today’s “gargantuan semitrailer trucks.” D’Arrigo wants the city to contribute about $150 million, with the rest of the money coming from state, federal and private funding.

A spokesperson for the EDC had not heard any talk of the market relocating when the lease expires in 2011, and insisted that the city would “ do everything we can” to keep it in Hunts Point, where its proximity to the newish fish market makes for ideal one-stop wholesale shopping. Meanwhile, the Village Voice looks at the struggling wholesale farmers’ market currently making do in a parking lot by the old Fulton Fish Market – those vendors were recently rebuffed by the Hunts Point Market when they tried to get space up there, but D’Arrigo says he’s willing to include them if and when the expansion takes place.

#expansion
#Hunts Point wholesale produce market
#jersey
#move
#South Bronx
#threat
#vegetables
Do you know the scoop? Comment below or Send us a Tip
A new Gothamist is coming! We’ve moved comments over to our beta site. Click here to join the conversation and get a preview of our new website.