How To Survive, Nay <em>Triumph</em>, At This Weekend's Big Apple Barbecue Block Party

This weekend Madison Square Park will once again host the Big Apple Barbecue Block Party, now in its 13th year and bringing together 17 of the country's best pitmasters for two days of meat-feasting.

This is a great time—one of my favorite food events of the season—and I'm not the only one who thinks so. Last year, the Big Apple BBQ drew an estimated 125,000 to the three-block area in and around the park, which, to put it in perspective, is greater than the population of entire CITIES, like Ann Arbor, Michigan; Hartford, Connecticut; and Berkeley, California. You will not feel lonely.

However, there are ways to maximize your meat eating while minimizing your line waiting, strategies that may be more crucial then ever this year, with the elimination of the fast pass option. Here's how I'll be playing it... 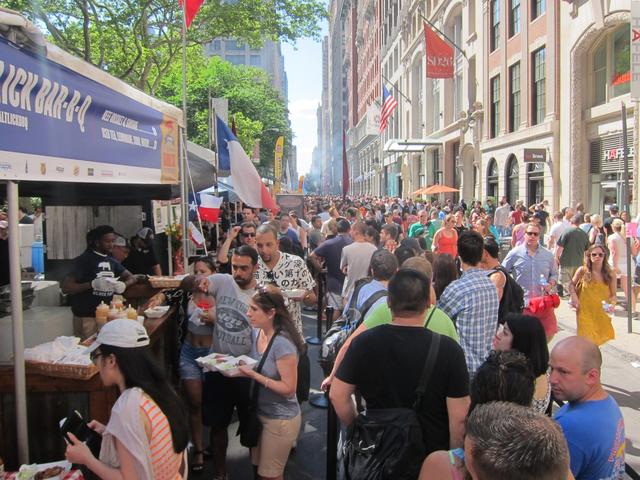 Wait, no Fast Pass?!? Yup, they've done away with the $125 Fast Pass option which, frankly, wasn't always so fast anyway, especially at the most popular pits. Does this mean the regular-people lines will be slower (because now everyone has to wait on them), or quicker (because traditional Fast Pass-ers will stay away without the extra entitlement, amounting to fewer people overall for the pit crews to serve)? Hmmmm....

Should I get the $275 BigPiggin' VIP Pass then? No, you should not. Even though each of the pitmasters will deliver the goods the the VIP area, that's a lot of scratch to throw around on a few hours, in my opinion. Sure, those big, fancy dollars will buy you "free" day-drinking, a chance to sit in a chair, an air-conditioned bathroom, and a catered buffet of "Southern-inspired dishes" prepared by something called Creative Edge Parties. But working for your food makes it taste so much better.

Go early. This is key. If you show up before 11:00 when the pits start slinging, you can get through three or four dishes, even the more popular ones, before the crowds start to get ridiculous. There: you've had an excellent lunch, and now you can go do something else with your afternoon.

Don't bother with the longest lines. I know. I want to try Tim Love's Lamb Brisket with Borracho ("in beer broth") Beans too. But the more famous a guy is (especially if he's TV famous), the more everyone wants to eat his food. So if Love's Woodshed line, or any other line, is an hour or more—which is entirely possible!—just accept defeat on keep moving. Yes, some pits are better than others, but the difference in degree of awesomeness among these 17 crews is pretty minimal. 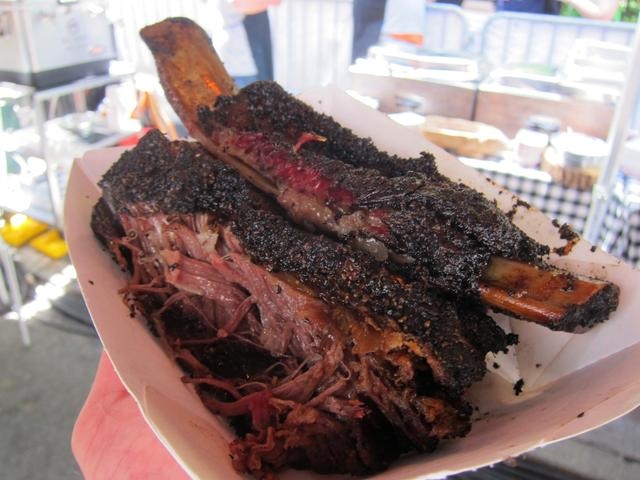 Eat ribs! This is obviously a personal preference, but it's been my experience over the years that the ribs at the Big Apple BBQ are exponentially more special than the pulled pork or whole hog offerings. The unique regional styles and pit tricks just seem to be more pronounced with these boned beauties. Not that the hog plates aren't good (they are) but you usually can't get ribs like these in NYC.

My pick pit hits. The biggest must for me are definitely the Baby Backs at Mike Emerson's Pappy's Smokehouse, which are caramelized right before serving by blowtorch. I usually eat two servings of these.

That's a lot of food, none of which you can get in NYC at other time of year, but if you still want more, I'll bet the Jamaican Jerk Ribs from Bill Durney and Red Hook's Hometown Barbecue are delicious as well.

The Big Apple Barbecue Block Party is located in and around Madison Square Park, with the pits set up along 26th Street and down Madison Avenue. Hours are 11 a.m (though lines start forming as early as 10 a.m.) until late afternoon. Admission is free; plates are all $9 to $12. (bigapplebbq.org)