The Summer of '69 was 44 years ago, and we've revisited the season before through LIFE magazine's August 22nd, 1969 issue, focusing on the cover story about what New York City's young people were wearing at the time (short skirts, long dresses, lots of makeup!)—but recently LIFE.com sent out a reminder about that issue, and we thought we'd focus now on this singular, spectacular shot from the spread—this is probably what it would look like if the Drapers ever used their sweet patio: 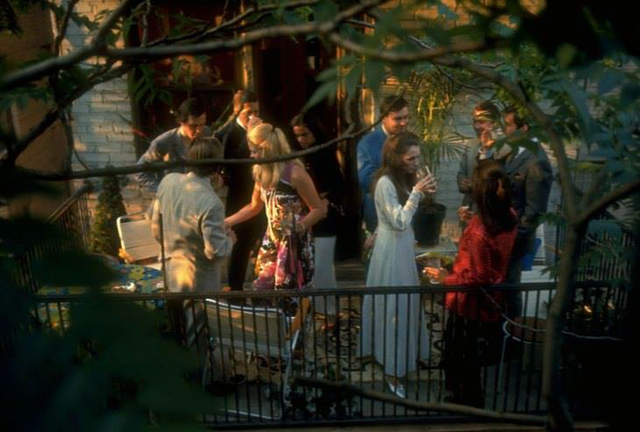 At the time, photographer Vernon Merritt III noted, "New York City is a costume party for the young this summer, a party that is taking place outdoors, on the streets and in the parks. The party is not always elegant, but it is completely alive." But what were they drinking? What were they eating? How did they party back then? Because it all seems so much cooler. Here are some (legal) ways the Youngs of '69 were enjoying summer party life:

Peel the tomatoes, chop, and put in a blender, together with green onions, salt, sugar, marjoram, thyme, lime juice, and lime peel. Blend until mixture is a puree, then add sour cream and curry powder. Chill in the refrigerator, and pour in a thermos.

For your next courses: stuff everything! Stuff your eggs, stuff your celery, stuff your mushrooms, and stuff some crab meat into a cocktail glass. 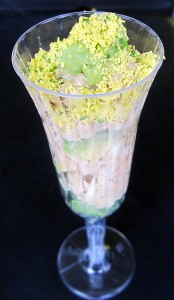 Get the instructions here. Avocados were big back then, Craig Claiborne, the New York Times food critic, wrote in July 1963: “The fruit known as the avocado is as adaptable as gelatin. It complements crab meat and other sea food and has a natural affinity for tomato and onion, oil and vinegar.”

Also: DIPS. All the dips.

The Moonwalk Cocktail (via Saveur)

Created at Savoy Hotel's American Bar, the cocktail commemorated the first moon landing, which happened that summer. Just shake up the following ingredients:

Mix well, and serve over ice.

But what about TEQUILA? "That strangely appealing Mexican import called tequila" became increasingly popular, and the NY Times was ON IT—from the Paper of Record's May 4th, 1969 edition: 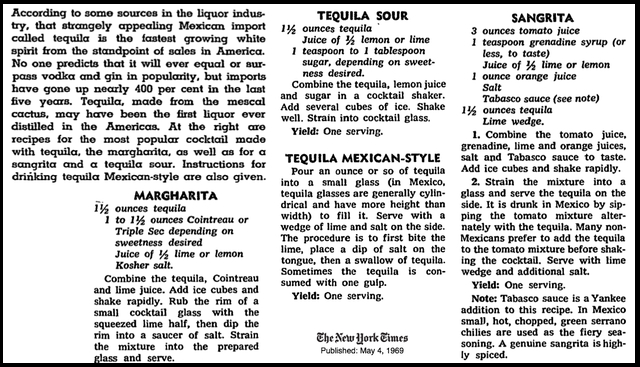 And as we know from last season of Mad Men, Hawaii was HUGE in the late '60s—so you can't go wrong with an island theme... or can you?:

"Fun" fact: "The Cocktail Party Problem" was A Thing by then—a study on human spatial hearing declared that "selective hearing" ability came to our attention with the rise of social soirees where people had close conversations in crowded rooms. So why not turn up some music? Here were some of the new releases from the summer of '69:

#1960s
#1969
#cocktail party
#flashback
#patio party
#recipes
#original
Do you know the scoop? Comment below or Send us a Tip