How To Make The Most Wes Anderson Of Fine French Pastries In the lead-up to tonight's Academy Awards, a group of NYU students took a trip to the Republic of Zubrowka.

Well, not really. The Republic of Zubrowka isn't a real place, of course. But twenty students did get a taste of Wes Anderson's Oscar-nominated Grand Budapest Hotel at Breads Bakery, where they learned to make courtesan au chocolat, the very important pastry from the film.

Organizer Julie Pitter, a senior and film chair of the school's Program Board, was looking for a way to get students involved with film beyond just screening a movie. A fan of Anderson's film, she got the idea for a baking class. Pitter reached out to bakeries and Breads came on board. While Breads Bakery doesn't make the courtesan, it does host regular baking classes, and once production manager Kelly Jacques found a recipe for the pastry, they were ready to go. 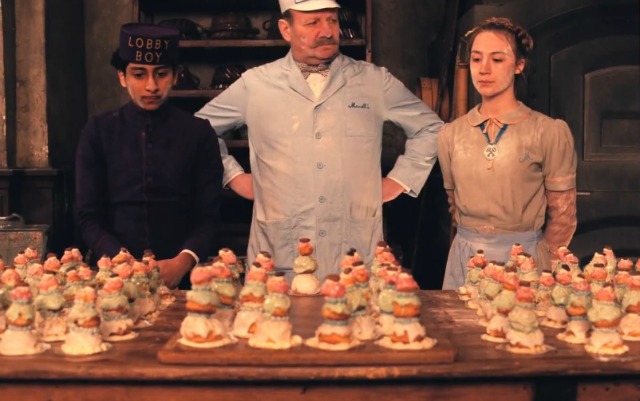 It was a little messier in practice

At its base, the courtesan is a pate a choux, an airy pastry dough used to make eclairs, beignets, and other treats. Working in groups of five, the students cooked up the batter and piped it out into small, medium, and large cream puffs. Piping is hard—the batter is sticky and difficult to control. I tried my hand at it, and let's just say I'm not holding my breath for a job offer.

While the choux cooked, the students worked on the rest of the ingredients. Each orb gets filled with a rich, chocolatey pastry cream. There was also icing to mix and white chocolate to melt.

Once the pastries were out of the oven and had holes poked in their bottoms, the real fun started. First came filling. According to Jacques, piping in too much filling can make the finished pastry difficult to eat. I'm not one to question an expert, but I also have trouble seeing how you could possibly ever have too much chocolate cream.

To decorate the pastry, you first dip each cream puff in icing. Once that dries, you pipe on melted white chocolate. In the film, this is applied as a delicate filigree; in our class, things were a little sloppier. The icing and the chocolate both have a tendency to drip, making things difficult. Fortunately, a messy courtesan is still delicious.

Once each layer is decorated and dried, all that's left is assembly. The layers are held together with buttercream (and, for good measure, a toothpick). A piece of chocolate completes the pastry. In our version, no escape tools were required.