How The $38 Pizza Won Over A Pizza Hype Skeptic

Every time I come across the latest pizza craze—whether it's Inception Pizza, Hawaiian Pizza, Russian Nesting Doll Pizza or even Pizza Bagels (ugh!)—I am deeply skeptical. As someone who thinks a classic plain slice is the ideal form of pizza, these pizza-adjacent concoctions often seem like nothing more than snazzy attempts at convincing the kind of people who dismiss pizza that it too can be packaged into a whimsical, artisanal experience. As Confucius once said: pizza is really simple, but we insist on making it complicated.

So it was with that same skepticism that I approached Sofia Pizza Shoppe and its DoughDici pie, aka the $38 pizza. The Sutton Place pizzeria, which hasn't been open a year yet, is only offering the specially-made six-slice pie a few nights each week for a limited number of seats (and it requires an online ticket purchase beforehand). Thanks to a very clicky NY Times article on the pie (describing it as "exclusive and elusive"), it has blown up in the last week into a bonafide pizza event—they've already sold out all their pies for the rest of May.

"It was never intended to be sold because it is a very long, tedious process," Sofia co-owner Thomas DeGrezia, who experimented for months with a Detroit style-pan before he perfected this pie, told us. "I also know it is one of those things people are going to roll their eyes at. And the thing is, it is a very limited thing. I'm only doing it until it's not fun anymore. If I read the comment sections, it wouldn't be fun right away." 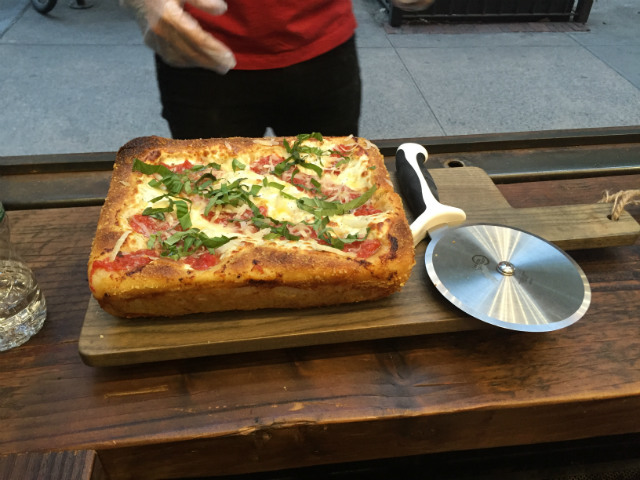 The comment section will have its turn down below, but for my part, believe the hype: the DoughDici is a remarkably delicious pizza-adjacent concoction. It's a well-balanced pie with hand-crushed tomatoes and four different kinds of cheese. It's like a cousin of the classic Sicilian slice (or as DeGrezia described it, "the bastard child between Neapolitan pizza and a Sicilian pizza"), but with one of the best crusts I've ever tasted. It's somehow fluffy and also doughy, airy but not floppy, flavorful but not soaked in grease. It puffs up like a soufflé but it's much more solid than you would expect.

That crust, and the amount of effort it takes to properly prepare the dough, is why the pie is so costly. The dough for all of Sofia's pizzas are cold-fermented for three days; for the DoughDici, that dough is then allowed to rise in a oil-lined pan with grated cheese for 12 additional hours ("The more black [bubbles] I get in that dough, the more I know this is going to be amazing"). That delicate process is to make sure the cheese is infused into the crust, and to keep it hydrated: "If it dries out too much, it won't rise properly and it'll give me a hard shell on top so it won't have that beautiful airiness."

DeGrezia has experimented with adding toppings to it, but found that they took away from "that beautiful airiness" and flavor of the bread, and made the whole thing too dense. A little bit of garlic is the only accent, and it's all it needs.

You can see a time-lapse video of the dough rising below.

It's understandable that some may balk at the price (which includes two complimentary non-alcoholic drinks), but considering the amount of time and labor that goes into the pie—DeGrezia has to start preparing it at least 12 hours before the first serving, which cuts into time with his newborn—as well as the garlic-tinged final product, it seems like a decent trade-off. (For comparison: a plain eight-slice pie costs $21.) Think of it as a special occasion pie. It's not something you're going to splurge for that often, but if you get the chance to go once—if have a friend coming from out-of-town, or consider yourself a pizza connoisseur, or have an erotic relationship with bread—I'd heartily recommend it. [Disclosure: DeGrezia comped my pie, but I would gladly go back again and pay full price.]

The biggest critique DeGrezia, 35, has received about his concoction isn't the price, but rather something I alluded to up above: pizza lovers complain that this is "not pizza," but something else. "I'm like, 'I know,'" DeGrezia said. "For me, pizza is that plain slice. It's what you like, but I always say to people to come in with an open mind, don't come in saying that's not a New York slice. Yeah, no shit it's not. It's not supposed to be. Just keep an open mind, come in with no expectations, you may absolutely love it, you may hate it. I don't know. It might be something and you'll be like, 'Oh that was great, but I don't need to do it again.' And that's fine. Like I said, it's just very limited. For me, it's just about how far I could take it—how extreme can I go with the dough?"

Speaking to DeGrezia about the genesis for the DoughDici, you realize this was never supposed to be a media gimmick or a cash-grab. He started making the pie just for friends and family, before it came to the attention of Arthur Bovino, who ended up writing that Times piece about it (and encouraging them to sell the pie). "I hate to think of it as a pretentious pizza," DeGrezia added. "I really do because it was honestly a family vibe. It's something that I made for my family over Christmas." 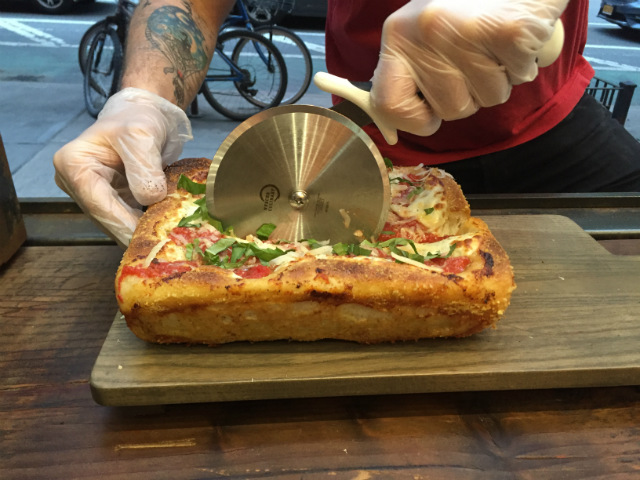 If all this has gotten you salivating at all, you better get on it—tickets can be purchased through Eventbrite, but the best way to watch out for when it'll be on sale is by following Sofia's Instagram feed. DeGrezia and co-owner Matt Porter aren't planning on serving them regularly for much longer. "After the summer's over we're not going to do it weekly," DeGrezia said. "It's just going to be random pop-ups. Like whenever I kind of feel like making it to be honest with you."

He did add that there are no plans to increase the price for now: "It's honestly so much work, I couldn't even raise it to a price that's even worth it to make, so I don't even know if I'm going to raise that," he said. "So many people called wanting to have it. I think I'm going to keep it the way it is because this pie is not about making money. We don't make money on this pie. This is really just for some people who love a pizza experience."