How Many Tacos Can You Eat In One Sitting? Find Out This Weekend

If a late afternoon learning to cook (and eat) some traditional and tasty foods from Ghana sounds relaxing, head over to the Court Street Collective, who are hosting Charles Cann from Tropical Ghana this Saturday. The author of several cookbooks about the foods of his native country, Cann is the perfect instructor to school you on making Shrimp Something—"for folks who want something simple and healthy"—and Plantain Boats, a Ghana classic typically topped with vegetables. The class is only $25 and includes drinks.

If you'd rather someone else did the home cooking, grab the L to Reclamation Bar in Williamsburg on Saturday evening, where they're hosting Yooeating?! Goes To Philly, another iteration of the fun Korean fusion pop-up. This time, Irene Yoo will be preparing dishes inspired by the city of Brotherly Love, like Philly cheesesteaks with spicy marinated pork bulgogi and a version of Korean egg bread made with scrapple and cheddar cheese. On top, for extra bite, kimchi peppers and pickled broccoli rabe. Swing by between 6 p.m. and 10 p.m. to score the goods, keeping in mind that they always sell out before the end. 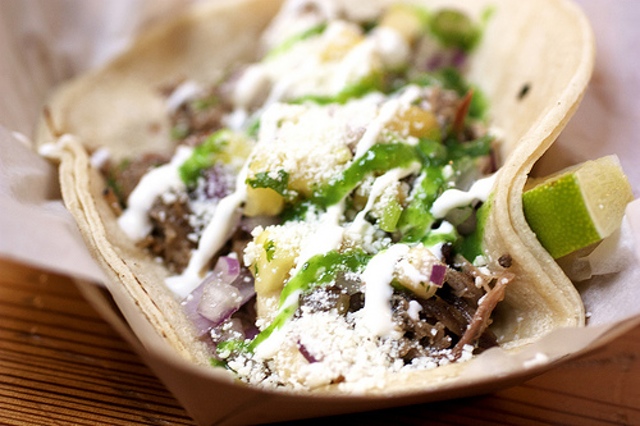 This taco is from Brooklyn Taco, but you get the idea

There are tons of tacos flying around Brooklyn on Sunday, first at the Brooklyn Taco Takedown hosted by The Takedowns at the Royal Palms Shuffleboard Club starting at noon. Home cooks are given all the Nixtamal tortillas they can fill with delicious meats and veggies—all presented for judgement. A $20 ticket gets you all the tacos you can stuff in your face. Meanwhile in Greenpoint, The Diamond is hosting a Taco Pop-Up and Guac Off, where The Fury will be dishing out tacos and ceviche with locals contributing their own guacamole recipes for sampling. The festivities begin at 2 p.m. with the guac champ announced at 5 p.m.

For the past decade, Rocco's Pizzeria in Bay Ridge has hosted an annual pizza eating contest to crown the heartiest eater in the neighborhood. Contestant slots have already been filled, but all are welcome to come and watch people stuff their faces with delicious pizza pies (for a taste of what you're in for, check this out). The contest begins at 3 p.m. in front of the 5th Avenue pizzeria, which'll be doing their regular business of delicious pizzas and Italian specialties, as well. The spectacle is actually an annual fundraiser, too, and this year they're raising money for Pietro's Fight, which hopes to find a cure for Duchenne Muscular Dystrophy.