How Does That Cherry Pie From Twin Peaks REALLY Taste? There are approximately 3-minutes worth of coffee and pie mentions over the course of Twin Peaks, which lasted two season and will be coming back for a belated third next year. One of the most iconic foods in pop culture history is that slice of cherry pie from the Double R Diner, with glowing reviews from nearly every character on the show:

"They got a cherry pie there that will kill ya!" — Agent Dale Cooper

"Yes I would [like a slice of pie], and a piece of paper and a pencil... I plan on writing an epic poem about this gorgeous pie." — FBI Regional Bureau Chief Gordon Cole

But how is this pie really? NYC-based photographer Sai Mokhtari recently hit up the Double R, known in this world as Twede's, for a taste—a slice costs $4.50, and a mug of coffee goes for $1.84. Fittingly, it was served to her by a woman named Diane, who said they will easily go through 9 pies a day on a weekday (quite a bit for a diner in a tiny town like this), baking 36 every other day.

How was it? Mokhtari fittingly described the slice as, "So bright red, viscous and shiny that it’s almost unnerving." Still, she devoured it... 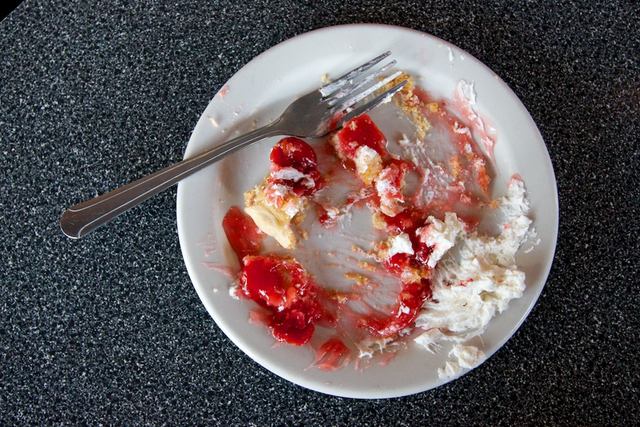 "I was a little thrown off by the artificial redness—almost looked like it’s made of wax or plastic. There’s little doubt that red #40 plays a huge part in the making of this pie. The brightness of the red and the shiny sugar granules on the crust really make it feel fake... Doesn’t feel natural in any way, but it’s actually pretty damn good for a diner—quite buttery. I cannot stress enough how thick the cherry glaze is—I swear if you turned a bowl of it upside down it wouldn’t go anywhere for a few seconds. It’s not the kind of glaze that drips. It’s the kind of glaze you can make shapes with. I felt a tiny bit... not ill, but uneasy after finishing a whole slice, but I would do it again in a heartbeat (and let’s be honest, a feeling of uneasiness should be a part of any Twin Peaks tour should it not?)."

And the coffee? "I’m not going to call it a 'damn fine cup of coffee.' It’s acceptable but only by diner standards. A little on the weak side." Well, as we recently learned, Agent Dale Cooper also enjoys the coffee at Newark Airport, so we weren't expecting a very high bar there.

Twede's Cafe is located at 137 West North Bend Way in North Bend, Washington... but certainly some Brooklyn bakery will artisanal-ize this before the season 3 premiere.

#cherry pie
#sai mokhtari
#twede's
#twin peaks
#washington
#original
Do you know the scoop? Comment below or Send us a Tip