The door opened and the smell hit me instantly: pungent and sweet, musky and funky; the room was filled with the heady aroma of fermenting grapes. It was warm and humid. I could almost taste the wine on my tongue.

It's the height of harvest season at the Brooklyn Winery in Williamsburg, and tons of grapes are being stemmed, pressed, fermented and bottled in three warehouse spaces adjacent to the tasting room and restaurant. It's a process that takes place every year from late summer to late fall. The winery bulks up its staff at this crucial time, with winemaking taking place seven days a week from 7 a.m. to 1 a.m. and sometimes through the night.

Turning grapes into wine in an urban setting takes logistical prowess. It's a game of "physical Tetris," head winemaker and partner Conor McCormack said last week. You have to really love wine to do this job.

The Brooklyn Winery, which opened in 2010, is unique in that its location is not in the vicinity of the vines that supply it with grapes. Indeed, unlike a winery in Napa or the Finger Lakes, the grapes, sourced from all over the country, must be sent in refrigerated trucks to Brooklyn. Idyllic images of pickups bouncing along dirt roads with grapes overflowing from their beds are not the reality here. Instead, tractor trailers maneuver the city streets.

The temperature of the truck and the safety of the grapes has to be diligently monitored, McCormack said, because prematurely crushed grapes will alter the fermentation process.

Once the trucks arrive on the narrow streets of Williamsburg, the winemakers take on new roles: traffic and safety enforcers.

"Fifty-four foot trucks have to park on Roebling [the Winery is on North 8th Street] and we use flags and cones on the street," said McCormack. "We have one person on safety patrol, one person blocking traffic. It's very challenging."

He tries to have all deliveries arrive at 6 a.m., he said, but, "you can't predict when a truck is going to come."

But once McCormack, who worked for years at California vineyards, has the grapes, the playing field is level and the urban winemaker plies his craft just like his rural counterpart. 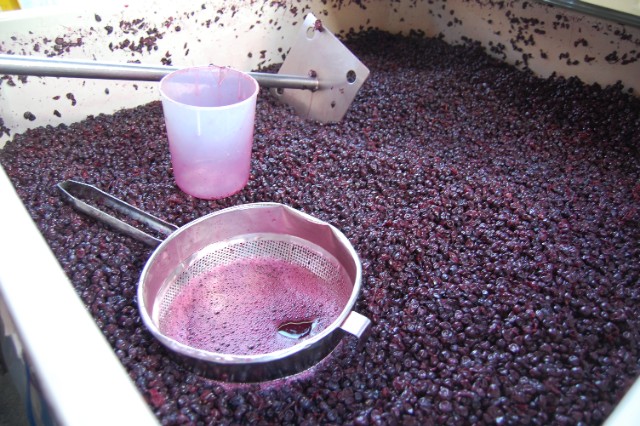 The process of turning grapes into wine is very specific, with some variation depending on the type of grape and the particular style of the winemaker. McCormack, for example, does not remove the stems and crush every type of grape. Instead, he allows some zinfadels and pinot noirs, among others, to break down on their own during fermentation. It may take longer, he said, but he likes the grapes to speak for themselves.

In the typical wine-making process, grapes are first sorted by people standing over a mechanical conveyer belt to make sure leaves, gloves or other items don't make it into your wine. Next, red wine grapes meet a de-stemmer machine that breaks them open, separating the fruit from the stem. The grapes then move to "fermentation vessels" where, in a dance with yeast, they begin the process of converting sugar into alcohol and CO2.

The white wine grape process is different: the grapes are never de-stemmed and instead are pressed first with their skins on, and the extracted juice is fermented and typically aged in stainless steel tanks, not oak barrels.

The day I visited, an 11-ton batch of malbec—harvested just 19 days earlier from the Suisun Valley in California—was moving from its first stage of fermentation into a large machine called a press. The malbec grapes spent 14 days fermenting, and when all the sugar was gone (McCormack prefers to wait until all the sugar is converted), the grapes were ready to move to the press.

Two winemakers were loading the press up with the grapes from bins that each held 1,500 pounds. Each bin produces about two barrels of wine. Using hydraulic pressure, all the soon-to-be wine was pressed out of the fermented grapes. It poured into a catch basin below the machine; as loud as a tub faucet turned to full blast. That crimson gold was then pumped into oak barrels for the malolactic fermentation stage, which alters the acids present. 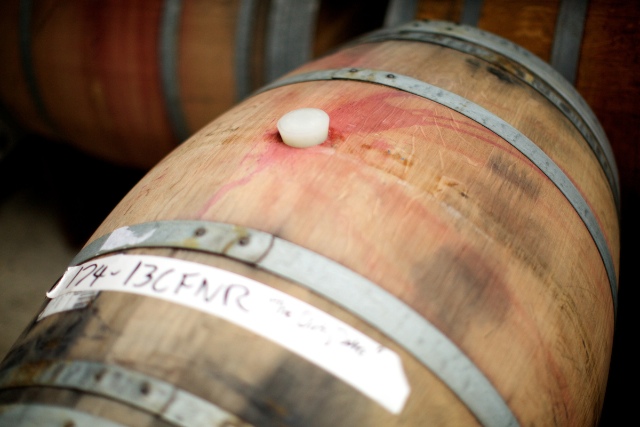 The Brooklyn Winery processes 150 tons of grapes each year, which translates to about 9,300 cases or 111,600 bottles. It takes approximately two years before the wine is ready to be poured, but exceptions include rose, which is meant to be drank young and does not go through the second fermentation stage. The rose at Brooklyn Winery is fermenting in tanks now, and will be ready come spring.

The malbec, on the other hand, needs lots of attention before it's ready. The oak barrels, stored in a back room kept at 60 degrees, will be topped off with more wine (oxygen is the kiss of death and can turn the wine to vinegar over time) and racked (a process that removes sediment) continuously over the next two years as it continues to age and mature.

And while that wine does its thing, 2011 and 2012 bottles will be poured in Williamsburg and vintage bottles at their new restaurant bkw in Crown Heights.

Georgia Kral covers (mostly) food and lifestyle topics and has been published in amNewYork, WNET's MetroFocus, WNYC, The New York Times and Brooklyn Based. She likes Chinese food, cats, straight-up cocktails and ankle boots paired with skinny jeans. Follow her on social @georgiakral.