Houseman's Double Decker Burger Is Worth All $17 The latest Quick Bites brings us to Greenwich Street for one of The Best Burgers... ever?

THE VIBE
There's a bit of having it both ways going on here at Houseman, an ambitious-casual restaurant that opened early this summer in what is kind of a weird area for such a thing, the dead zone just north of Tribeca at the still-pretty-commercial bottom of Hudson Square.

Houseman co-chefs Ned Baldwin and Adam Baumgart, who both spent time at first wave ambitious-casual Prune, were determined to create a neighborhood place where locals would want to and could afford to stop in a couple of times a week for a meal. In fact, the name Houseman is supposedly inspired by the Swedish word for "everyday food," husmanskost.

And the design (inviting and comfortable, by Louis Yoh) and attitude (warm and helpful, by the entire front of house staff) support that low-key, neighborly ideal. There are blond wooden "school chairs" and tables made from repurposed bowling lanes, of all things. There's a gnarly piece of driftwood hanging on the wall in one of the banquette sections toward the back. A couple of sleek picnic tables sit up front by the windows, and the wide zinc bar is made homier by the row of friendly blue stools and a pair of free-flowing plants. 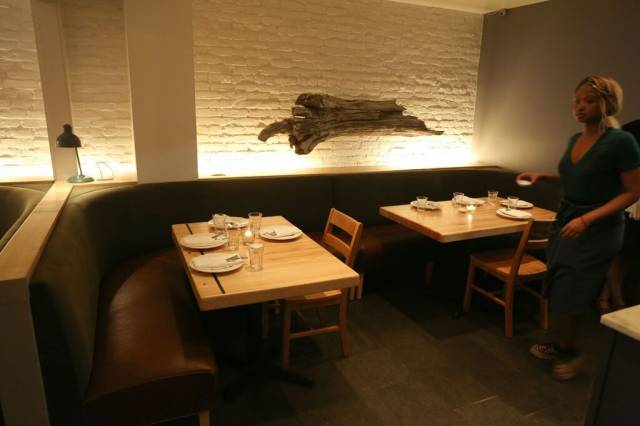 But Baldwin and Baumgart are clearly restless, creative chefs, and so the brief but wide-ranging Houseman menu is much more adventurous than you'd find at a typical drop-by spot. The prices, too, are considerably higher than you'd expect from a neighborhood joint... unless, I guess, that neighborhood is Tribeca, where a quick $60 dinner is unlikely to be a budget buster for most of the locals.

THE BITES
So Houseman sends out some mixed messages. Thing is though, you can get away with that sort of thing when you're also sending out food that's as exceptional as Baldwin and Baumgart are making right now.

For example, the excellent double-decker Houseman Burger, which clocks in at $17, a price that's not unreasonable all things considered: the meat is courtesy of a cow from Vermont's Royalton Farms, there's cheese melted over both patties, the topping is a caramelized onion and roasted mushroom relish (giving just the right hit of both sweet and earthiness), and the buttered bun is a Martin's potato roll. Those fries are terrific, too, and will cost you $2 more.

You don't have to know any of the above to love it. It's one of the best burgers I've eaten this year, but unlike many overwrought fancy burgers around town these days, it eats casual, like it was made by your buddy in the backyard.

If you go to Houseman within the next few weeks—and you should, because once everyone gets back from their beach mansions this place is going to be slammed—you'll likely still find the Roasted Peaches starter on the menu. The stone fruit in this dish is explosively sweet and juicy, it's tossed with crisp salty pancetta, soft salty feta, hazelnuts for added crunch, and it made me miss the kind of summer I didn't even have.

To start things off, get the Pickled Bluefish, which again shows the kitchen's deft touch, as the big swimmer retains its oily richness under the acid of the pickling process. Joining the fish in your bowl are a lively bunch of crunchy vegetables, slices of soft egg, enough fresh dill to make a difference, and a thick creamy sauce to hold it all together. Again, this dish screams summer, and likely won't be around for too long.

More autumnal in its heft and flavoring is Houseman's Goat Sausage, the animal having also been raised in Vermont, and, as my smart and spunky waitress promised/warned me, "it's 100% goat, so it's got all that fat and flavor... it's very goaty." Indeed it is. Also very delicious, sliced and fried for a near-crackling outer layer, and served atop a pile of braised bitter greens and a stewed onion and tomato combo. There are only three other entrees on the Houseman menu, but if they're as memorable as this one, that's all anyone needs.

THE VERDICT
I had very little company in the dining room both times I ate at Houseman, a situation which is likely to change big time when the fall rush hits. And as pretty and airy as the room feels in the now, it has a strong potential to get all cozy too, come winter. Houseman is a destination splurge with the air of a neighborhood spot, and certainly one of my favorite new restaurants of 2015.

#houseman
#hudson square
#quick bites
#original
Do you know the scoop? Comment below or Send us a Tip
A new Gothamist is coming! We’ve moved comments over to our beta site. Click here to join the conversation and get a preview of our new website.