Despite its massive presence on Coney Island—and beyond—Nathan's Famous hot dogs were not the original tubed meat on a roll offering in the seaside neighborhood, which has become synonymous with hot dog culture nationwide. In fact, there wouldn't even be a Nathan's if it weren't for Charles Feltman, who employed a young man in 1916 named Nathan Handwerker at his sprawling Coney Island complex, where he created a version of what's widely credited as one of the world's first hot dogs. Sadly, the Feltman's reign on Coney Island ended in 1954, but a team of dedicated New Yorkers are bringing the Feltman's name back into circulation, with an aim to take on their "rivals" on Surf Avenue for a hot dog rematch that's over a century old.

Coney Island historian and tour guide Michael Quinn are reviving Feltman's starting with a pop-up on May 26th at Ditmas Park's Sycamore. "These days it's probably better when you're starting a business to do these pop-up events, so people kind of understand and know the brand and the history of the product," he says, a fact driven home by Feltman's relative obscurity in modern hot dog parlance. "Really what sticks out more than anything for what he was known for was, ironically, his restaurant. Even though he sold hot dogs and was the original inventor of the hot dog, his restaurant was known for its hotel and for its seafood," explains Quinn, who's become something of an expert on Feltman's. "Hotdogs were kind of below him at a certain point."

Feltman's NYC story begins in 1867, when the German immigrant began a pushcart operation that sold food to sunbathers on the beach. In his first year, Feltman reportedly sold 3,684 sausages on rolls, which he created as an alternative to eating the meat on plates with forks. Bolstered by the profits of his cart sales, Feltman ultimately created the world's largest restaurant complex at the time, with 4,000 gas lamps, 12 restaurants, 2 bars, the most famous carousel in America. 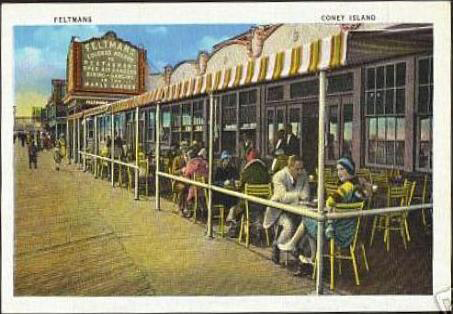 Despite visits from President Taft and Diamond Jim Brady, the Feltman's empire crumbled—and there are those who blame Nathan's for bringing down the operation. The story goes that Handwerker left the Feltman's family in 1916 to open what would become Nathan's Original just a few blocks away on Surf Avenue. In what turned out to be a shrewd business move, Handwerker began selling his hot dogs at half the price than nearby Feltman's. "He went off and undercut Feltman by 5 cents, because a 10 cent hotdog, at the time, was outrageous in 1915," according to Quinn.

Quinn, however, questions this narrative. "They never had competition, really. These two businesses coexisted for nearly 40 years. People like the whole 'Nathan's put Feltman's out of business' thing. No! Nathan opened his stand in 1916, Feltman's lasted until 1954. Feltman's was a completely different type of place! There was a park there, they showed outdoor movies, and they had the carousel. It was more of an upscale clientele at Nathan's."

When Feltman's 2.0 debuts at Sycamore in May, it'll offer two different types of hot dogs and two different types of buns as both a tribute to the original and a hat tip to modern tastes. "As far as the product, I'm really trying to have the hot dog represent the original, as they called them, 'Coney Island Red Hots.' The original hot dog was not called a hot dog, it was a 'red hot,'" he revealed. "I know Feltman used a pork sausage; I'm probably going to have both options, pork and beef. He also had a bakery in Park Slope and I know they used pastry buns, and I know it's very popular now with the potato buns. Again, it's not going to be exactly what he served back then."

While the Feltman's reboot is starting as a series of pop-ups, Quinn has big plans to bring the brand back to its roots. "Eventually, I'm looking at some space in Coney Island," he told us. "I'm almost 40 years old, so I remember Coney Island way, way back and it's just great to see the area the way it is right now. I really think it's a new renaissance in that area right now. It went through different periods of highs and lows but when you go down there on the weekend when the rides are open it's like nothing you've seen." Sadly, the last remnant of Feltman's empire was torn down in 2010.

In the end, Quinn isn't worried too much about competition from Nathan's—and doesn't think they should be, either. "Honestly, I don't think it would really hurt them that much. If anything, it'll give them more publicity when people come down and say, 'let's try Nathan's hotdog and a Feltman's hotdog.'" Still, Quinn isn't above giving Nathan's a taste of its own medicine: "I know Nathan's just raised their hotdog to $4.15. We're going to be selling ours at half that price."

#coney island
#feltman's
#hot dogs
#nathan's famous
#pop-up
#sycamore
#original
Do you know the scoop? Comment below or Send us a Tip