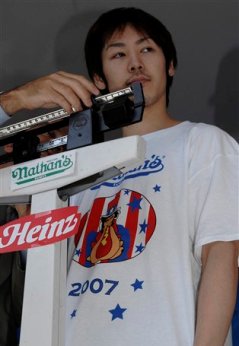 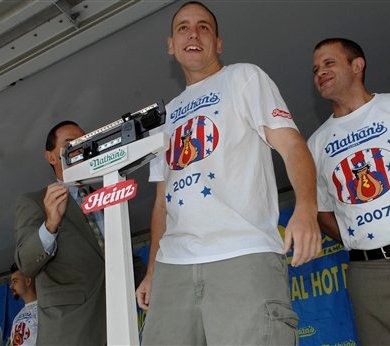 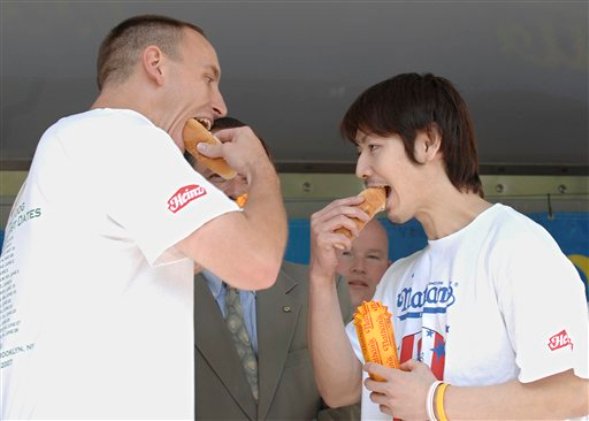 Kobayashi had signaled his all-important jaw muscles weren't feeling that great, thanks to wisdom tooth surgery, but he announced he was competing in this week's event, to honor the memory of his late mother. However, it seems like Chestnut will have a fighting chance to bring the mustard belt back to America - the last American competitor to win was Steve Keiner, in 1999. Besides, the mustard belt, there's $20,000 in total prize money.

The Post printed odds on Sunday: Kobayashi, even; Chestnut, 4-5; Timothy "Eater X" Janus (a New Yorker), 20-1; and "Crazy Legs" Conti (another New Yorker), 20-1. And if you want to see the event live and in person, head to Coney Island early! There's a show that accompanies the event at 11AM, and the actual 12-minute eating contest starts at 12:40PM. ESPN broadcasts the event between 12PM and 1PM.

And, like last year, we'll be liveblogging the event, as Tien Mao attempts to eat as many hot dogs as his stomach can handle during the 12 minutes.