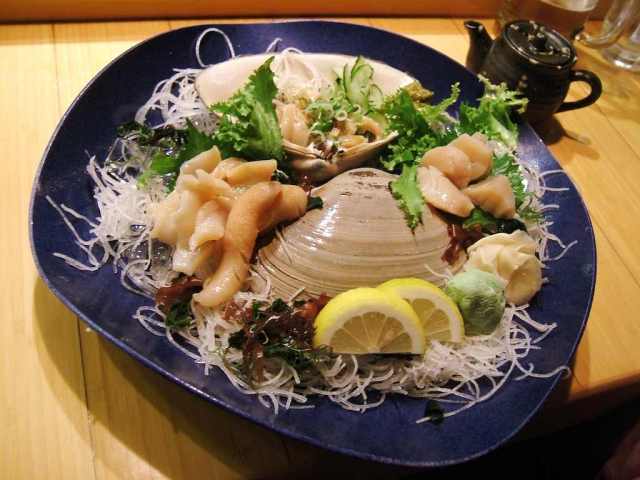 The other night when Gothamist went to the wildly popular Yakitori Totto, the hostess told us we'd have to wait 40 minutes for a seat at the counter. After giving her our phone number, we headed downstairs to cool our heels at a location of the Japanese minichain East.

Our dining companion told us East is one of the city's best kept secrets. Since we started out with yam fritters, we didn't quite see the reason for all his kvelling. Upon tasting the ultrafresh raw oysters, we began to see his point. But it was the aoyagi sashimi that sealed the deal. Despite frequent trips to the sushi bar, Gothamist is embarrassed to admit that giant clam had never crossed our lips until that night. It took so long to prepare this meaty mollusk that we were concerned we might be late for the impending chicken skewer orgy. For a moment we kept wondering why the sushi chef was washing his hands with salt, then we realized he was carefully rinsing and salting the clam.

All that prep time paid off. The entire dish was so fresh looking that we expected to be hit in the face with salt spray when it was put down before us. Some of you may be tempted to think that the clam flesh was chewy and/or funky tasting, but let us assure you that it was toothsome and delectable.

One of the advantages of the aoyagi's size is that it can prepared several ways in one serving. On the left are ribbons of clam meat, which had a slightly crunchy texture and tasted of the sea. In the center is some chopped clam that had been mixed with soy sauce and had a little dollop of crazily good green pepper paste. The tiniest dollop of this yuzu-infused paste transformed the clam entirely. Lastly, on the right are tender medallion-like pieces of clam that had a pleasing sweet flavor.

With seafood this good available next door we'll wait 40 minutes for a table at Totto any day of the week.

#bar
#chicken
#dining
#food
#gothamist
#restaurant
#restaurants
#sushi
#the city
Do you know the scoop? Comment below or Send us a Tip