The legendary White Horse Tavern, one of the oldest bars in New York City and a venerable literary haunt, closed on Sunday night for renovations, a tipster informed Gothamist. The Greenwich Village Historic Society for Historic Preservation confirmed the news on Twitter, and the bar's windows have since been papered over. 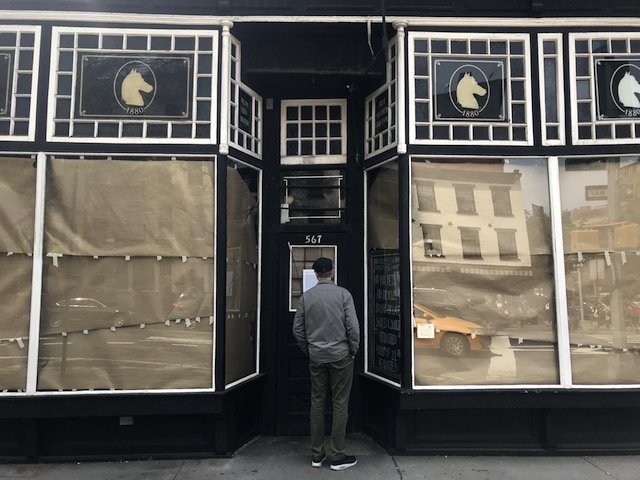 The White Horse Tavern will be shut for weeks as it undergoes repairs. (Paula Mejía/Gothamist)

The White Horse recently changed hands when the building it occupies was sold to the infamous lardlord Steve Croman, who recently did time in prison for tax and mortgage fraud. The bar's new proprietor, Eytan Sugarman, is a restaurateur whose ventures include Midtown's Hunt and Fish Club, which has ties to Anthony Scaramucci.

In a community board meeting last month, Sugarman reassured worried West Village residents that besides tweaking a few things (and having "a little bit of a better burger") he would keep the beloved bar as is. "I have every intention of keeping this amazing institution the way it is, I have no intention of making any dramatic changes," Sugarman said in front of Community Board 2. "I want to fix what needs to be fixed, I essentially took this to maintain the integrity, to preserve the White Horse Tavern."

Update: A sign posted to the bar's door said it would be shutting down to make "some much needed repairs and upgrades" over the next few weeks. "Have no fear, we have no intention of changing any of the historical elements that make the White Horse Tavern the landmark that it is," it reads.

The historic bar has been a city landmark since the late 1960s, which means that Sugarman and his team can't make changes to the exterior. The White Horse's interior, though, is another story—though there's been a recent movement to landmark the inside of the bar, too.

It's unclear what changes might take shape, or when exactly the White Horse will re-open. But wary barflies worry that the bar's spirit is in danger, as well. Last month, a handful of regulars held a "wake" for the longtime drinking spot of legends like Dylan Thomas, the Welsh poet who infamously dropped dead after drinking at the White Horse.

Online, people reminisced and paid their respects to the old watering hole over the weekend.

On the last day the White Horse Tavern operates under the old owners, they have 26 bottles of Fire Ball, and they're VERY serious about getting rid of all if it! Come on down! pic.twitter.com/jUUjq95cd4

Yesterday #NYC lost a legendary place. The White Horse Tavern closed after 139 years of beer stand glory. I have spent my fair share of time and there but not as much as Jack Kerouac who spent so many hours there someone wrote “Jack go home” on the bathroom wall... pic.twitter.com/tNtEqlFeGl

Oops, I’m too late photographing my watercolor painting of the White Horse Tavern! It’s closed as of today for “renovations,” we’ll see what it looks like when it reopens and hope the calls to landmark the interior were heard. Dylan Thomas drank here in the 1960s! pic.twitter.com/auP8Kq6TRU

Attempts to contact Eytan Sugarman and the White Horse Tavern on Monday morning were unsuccessful. We'll update as we find out more.