[UPDATES BELOW] Caffe Reggio, which we just visited (and enjoyed brunch at) over the weekend, has been shuttered by the Department of Health. A tipster sent along these photos taken this morning, and we've reached out to both the DoH and Caffe Reggio for more details. We'll update when we hear back. 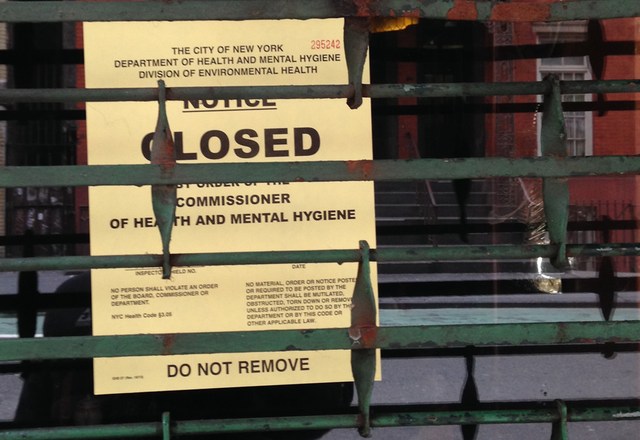 The historic cafe—the first to bring cappuccinos to America—has been doing business on MacDougal Street since 1927, so we imagine this isn't their first run-in with the DoH, but in recent years they've boasted an A-rating.

Before this, Cafe Reggio's last inspection was in July. The most recent violations listed on the DoH's site are for sanitary reasons, like surfaces not being properly washed.

UPDATE: The DoH tells us "Caffe Reggio was closed due to a public health hazard that could not be corrected at the time of the inspection. In this case, they had a severe mouse infestation. They can request a reopening inspection as soon as they certify that the problem has been corrected."

UPDATE II: A rep for Caffe Reggio told us Friday (December 12th) that they renovated the kitchen, and were reopened as of the evening serving coffee and cakes only. They will be open and serving a full menu starting Saturday.

#caffe reggio
#department of health
#doh
#greenwich village
#original
Do you know the scoop? Comment below or Send us a Tip