In 2010 I moved to Ridgewood, Queens. There were three reasons for this, aside from needing a place to live: a few good friends had been living there for years, so I was pretty familiar with the neighborhood. It was less expensive than other neighborhoods where other friends were living. And it was close to Williamsburg and two subway lines and all that I was used to. Plus one of my favorite restaurants, Northeast Kingdom, was on the borderline of Ridgewood and Bushwick, in an area now unfortunately dubbed Jefftown.

I immediately explored beyond the Bushwick border though, and was determined to find a Ridgewood bar that I liked. At that time there were not many options, and I was about to settle on Cozy Corner Tavern or Windjammer when I found Gottscheer Hall. It was pretty perfect—a couple of old locals at the end of the bar, a great jukebox, and framed portraits of former Miss Gottscheer pageant winners lining the entranceway, giving it a bit of a Laura Palmer vibe. 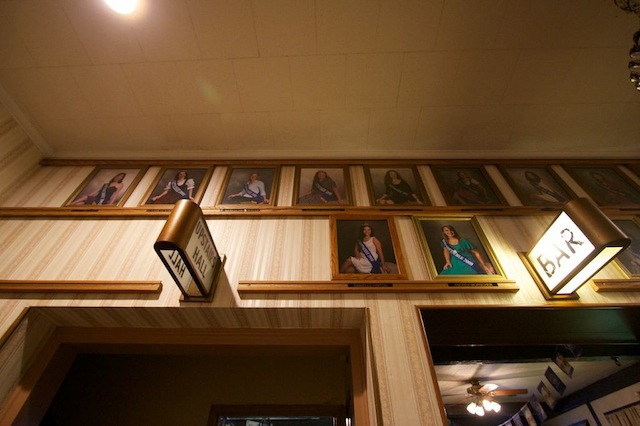 The bartender, Trina, was happy to have some new people sitting at the bar, and would often comp myself and my friends some wine or spaetzle. We were solid customers, returning again and again, and even started planning some shows to put on in their back hall. (This place—which is around 90 years old—is massive.) There were nights they would randomly not be open and we'd fear the worst, so we wanted to bring any business there we could, and they welcomed it. I even got to tour the upstairs where the ghosts live. Did I mention Gottscheer is haunted? A story for another time.

When I moved in 2011 the place was still pretty empty on most nights, but a few new people had started to hang out there. Now it's 2014, and boy golly HAVE THINGS CHANGED YOU GUYS. Gottscheer has now been overrun with hipsters, if you're to believe reports, and reblogged reports. Brokelyn posted a photo of said "hipsters," but those people actually happen to be my non-hipster friends, longtime patrons of this bar, and Queens natives who have been living in Ridgewood since the mid-aughts. But whatever: young people, wearing knit caps, in a bar in Queens! These are crazy, crazy times. But at least we can all agree this is a good thing for Gottscheer.

I reached out to Trina today—who is still behind the bar there, and who I am still Facebook friends with—and she told me that, yes, she has noticed a difference at the bar, "lots of younger people, say 25 to 35. Super great people, I must say." So this is all very harmonious, for now. She added that "week nights are a little quieter than weekends," telling me to drop by this weekend after 10 p.m. But I prefer those old, quieter days, when it was just me and the ghosts.

#gottscheer hall
#queens
#ridgewood
#original
Do you know the scoop? Comment below or Send us a Tip