New Yorkers have never met a dumpling they didn't like, whether it's cheap (and possibly dirty) or super expensive, Pac-Man shaped or the size of one's head. If it's meat or vegetables wrapped in dough, we'll take it.

While Chinese dumplings have long reigned in style and scope in our boroughs, we don't want for versions from other countries, like the momo, Tibetan and Nepalese dumplings. Versions of the treat abound in Queens and there's even an annual dumpling crawl celebrating the hearty purses. For a closer examination of the popular offerings, we visited Himalayan Yak, a longtime Jackson Heights staple serving a trifecta of Tibetan, Nepali and Indian cuisines, anchored, of course, by momo.

Momo enjoy status as the most popular fast food in places including Tibet, Nepal, Bhutan and surrounding regions. In New York City, there are dozens of styles and locations to enjoy momo, and at Himalayan Yak, they offer a minimum of four different momo fillings and shapes, sometimes even offering their namesake yak. 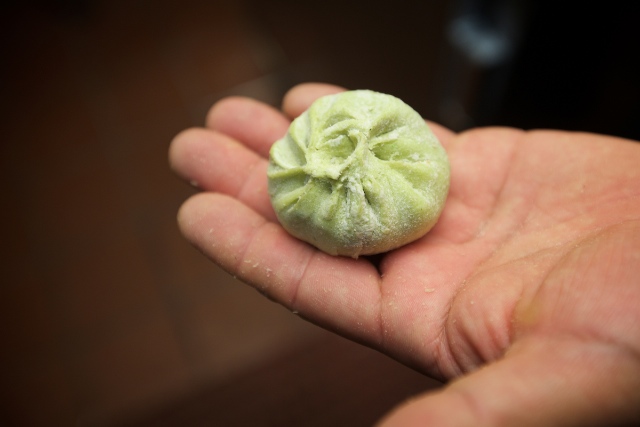 Vegetable momo are characterized by their green dough, made from pureed bok choy (Clay Williams/Gothamist)

Regardless of the protein or vegetable, momo are characterized by the fresh spices that are mixed with the main ingredients and tucked into a simple dough of water and all purpose flour. At the Yak, that means a combination of garlic, ginger, cilantro, red and green onions, soy sauce and salt. The fresh components maintain much of their zest after cooking, lending crunch and brightness to the rich dumplings.

Most momo you'll encounter have been steamed in bamboo-type baskets like Chinese Xiao Long Bao and others that employ the same cooking method. However, momo can also be deep fried so the entire dumpling skin is more crisp, or steam fried, where the bottoms get a nice browned crunch but the domes stay tender.

When it comes to eating, some say it's a one shot deal, popping the whole dumpling into your mouth so as not to miss out on any of the juices trapped inside. It's a gamble on scalding your tongue, but the burst of flavor is welcome, especially on a cold evening.

The momo are also traditionally served with a variety of sauces with varying degrees of heat, like a red sauce with roasted red chile pepper, garlic, Sichuan peppercorns, olive oil and soy sauce or the green sauce with avocado, tomatillo, spices and lemon juice. Manager Jamyang Gurung says the sauce employment method should be from bowl to plate, where you dip the momo before transporting to your mouth, and that it should be a one sauce to one momo affair. But Gurung isn't strict: if the moment calls for two sauces per momo, follow your heart. 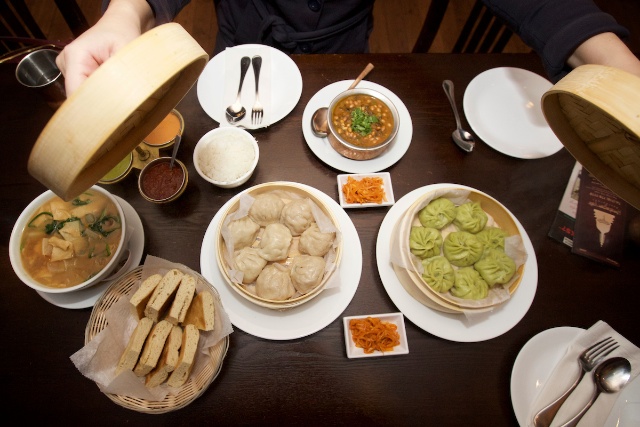 Momo are just one part of the meal (Clay Williams/Gothamist)

While momo are a must at Himalayan Yak, it would be a big mistake to stop there. Thenthuk, a comforting bowl of hand cut noodles in a savory broth is another must-order, especially during the winter. Spicy vegetable-based curries, takari, like one made with gundruk—the fermented leaves of vegetables like cauliflower, mustard greens and radishes—are particularly good and balance out lots of starch.

And while it'll take quite a bit of practice to form dumplings as beautifully sealed and presented as the ones depicted here, making momo at home is what many families in Nepal do regularly. Gurung recommends a recipe like this as a good starting point.

#Himalayan Yak
#jackson heights
#momo
#original
Do you know the scoop? Comment below or Send us a Tip