It's been more than ten years now since Marc Glosserman opened the acclaimed Hill Country Barbecue Market on West 26th Street (in earlier days it received two raves in the Times, one in 2007, the other in 2012), part of a wave of first-rate pits that helped calm long-time complaints that New York City can't do BBQ.

The original Hill Country is more of a party spot these days than a serious meat-eater's destination, and Glosserman's expansion into Downtown Brooklyn in 2014, with both his BBQ and fried chicken enterprises, wasn't as successful as hoped. And so there's been a pivot of sorts, to the brand new Hill Country Food Park, a soaring open space featuring six separate "restaurants" circling a communal dining area.

The idea here is to channel the Austin food truck scene where, apparently, Texans gather 'round with their tacos and ribs, pizza and ice cream, and eat outside at picnic tables under strings of light. It sounds like your basic NYC food hall circa 2018, except that all of the booths here are, of course, run by the same kitchen, and the layout is less warren-like, with all options visible from every table, encouraging mixing and sharing among your party.

Two of the stalls are basically just smaller versions of the restaurants that used take up this entire space: Hill Country Barbecue Market, firing up their signature post-oak-smoked meats like brisket, pulled pork, turkey, and Kruez sausages, sold by the pound or in sandwiches; and Hill Country Chicken, whose menu includes single pieces of fried bird, Chicken and Waffles, and various sides. These two stalls served the best dishes that I ate on two visits last week, including some smoky ribs, an excellent sausage roll, and a lively Hot Honeywich Chicken sandwich.

Pizza comes from Austino's, named after Glosserman's son. There's nothing particularly Texan about the dough or the preparation of these—in fact, they're closer to Detroit style than anything else—and the meats are mostly from barbecue stall across the park. These are decent enough slices, but need more love in terms of toppings (or lack thereof). Nickie's, the "Mex-Tex" stall, is named in tribute for a Glosserman family friend who made them all tamales back in Lockhart, Texas. Tacos, nachos, burgers, and chili (and tamales of course) are all on the menu here, again utilizing that Hill Country brisket and pulled pork. 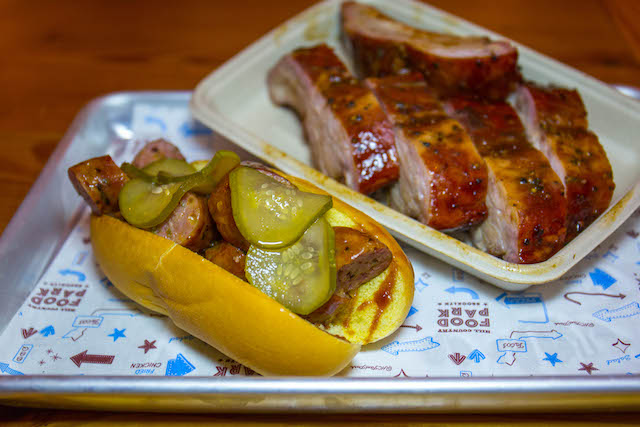 For the more veggie-inclined among you, Bluebonnets has you covered with a number of "farm-to-counter" salads and sandwiches, all named after female country singers, like the Dolly, the Emmylou, and the Tammy. Finally, there's the South Congress stall, just like the main drag of Austin. Here you can get breakfast tacos from King David's, coffee via City of Saints, a variety of Du's Donuts (which are always a pleasure), and a half dozen or so flavors of Van Leeuwen ice cream.

Upstairs there are more tables and a couple of Skee-Ball set ups, and this is where parents tend to hang out and let their kids run around. Coming soon ("early 2019") to the Park is the reincarnation of the beloved Boerum Hill dive bar Hank's Saloon, which will presumably change the vibe a bit.

#downtown Brooklyn
#hill country
#hill country food park
Do you know the scoop? Comment below or Send us a Tip