Sunny skies herald the arrival of yet another seasonal food and goods market with the return of the Hester Street Fair to the Lower East Side for its annual Saturday encampments. Now in its seventh season, the fair added some new food and craft vendors to the lineup, the extent of which will be fully revealed on their website at some point soon and at Saturday's opening day.

EN Japanese Brasserie will be frying up their version of Japanese Fried Chicken, while Spur Tree will be offering jerk chicken along with other Jamaican-Asian eats. Scarr's Pizza, a retro pizza joint that opened on Orchard Street a few months back, will be slinging full pies, slices and subs like their Sausage & Peppers and Meatball Parm. Finally, Gordo's Cantina offers Central Mexican fare, which included street corn, a special hot dog and Abeula Guacamole with serrano peppers at a recent event. 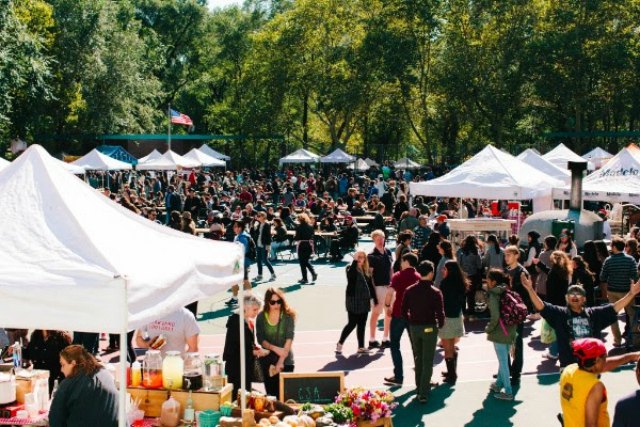 The fair's well-attended special events are also on the calendar, like their Indie Record Day, the Ice Cream Social, Pet Day and an end-of-season tomato canning party, among others. They're also debuting a new workshops effort, with themes like DIY tie-dyeing, shoe-making and a class on fermenting foods.

Hester Street Fair runs Saturdays from May 14th through October 29th from 11 a.m. to 6 p.m. at the intersection of Essex Street and Hester Streets

#hester street fair
#original
Do you know the scoop? Comment below or Send us a Tip