Here's Why The Martini Glass Got Replaced By The Coupe

The Martini Glass (or: Cocktail Glass) is a much reviled vessel. A cruel joke. An inverted cone bowl meant to hold inebriating alcohol that one will find difficult to hold even when sober. How many ounces of gin and vermouth have you spilled while holding one of these things? The flawed design has now become so hated that you'll rarely find a martini served in one. Instead, the friendlier Coupe glass has stepped in as the new favorite.

Vincent Mauriello of the Gerber Group and the new Campbell, told me why they prefer the coupe for both its form and function: "We use the coupe over the martini glass for the both the style and function of the glass. Martini glasses spill a lot easier than coupes. We noticed that whenever guests pick up their martini, they'd spill it all over the bar and the floor as they walked away. Your booze is more safe in a coupe. As for the style, its just a personal preference—we prefer the look over the martini."

Meanwhile, Roman Tartakovsky, the Beverage Manager & Head Mixologist at Pier 81, says the Martini Glass is simply aesthetically unappealing to our 2017 eyes. We have included Tartakovsky's full quote below, because it is simply too amazing to edit:

The wonderful world of cocktails has natural frequencies just like everything in life. The same way how fashion returns every few years we are now seeing the strongest revival of pre-prohibition style cocktails. With that comes the hardware associated with it. The sharp edges of the modern martini glass seem like a dated relic and boastful reminders of bartenders dressed in black and white with tight fitted bowties and country club manners.

The modern mixologist is hip and friendly donning denim aprons and plaid button downs accompanied by a well angled fedora. Possibly fashion statements to commit to a prohibition era bartender, which didn’t require uniform due to the casual nature of illegal speak easies. The rotation is fad oriented, I’m sure in 10-20 years the sharp edge cosmos will return and our coupes will become dormant again until their next revival. But until then, enjoy your sidecar in a coupe and cheer responsibly.

He added that "humans are very visual creatures... [and the coupe provides] a nice photo opportunity, which is becoming one the most crucial components. Cocktails must look their best and always photo ready when being served."

Billy Nichols, bar manager of Faun in Prospect Heights, told us that “the martini glass is a perfectly acceptable vessel for cocktails that have inherited much of the malign aimed at the cocktail scene from the '80s and '90s." Notably, "the saccharine-sweet, brightly colored cocktail [that] coincided with the popularity of the V-shaped martini glass." See, Carrie Bradshaw on almost every episode of Sex and the City. 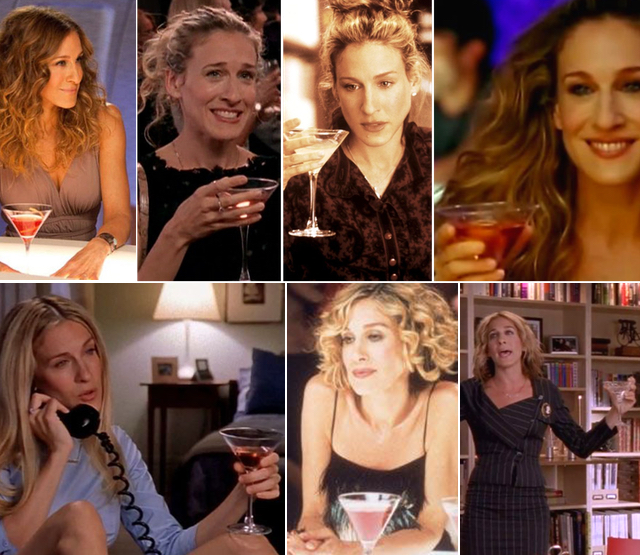 Nichols further explained, "When craft bartenders began to reimagine the cocktail scene, they based recipes on books from the 1920s, distancing themselves from the neon sugar-bombs of more recent decades. The coupe, or Marie Antoinette, comes from these bartenders’ search for authenticity in presentation. I like using the coupe because it is more versatile.... most drinks look nice in a coupe."

And finally, Stephen Thomas, head mixologist of aRoqa in Chelsea, says the martini glass is officially dead; he told Gothamist, "The days of the martini glass are long gone. Not going... Gone. People want a more aesthetically pleasing drink and one that doesn't spill. You can make a proper drink in a coupe or a Nick & Nora glass."

And as for the question of volume, you are likely getting the same amount of booze—both the Coupe and the Martini glass come in a range of sizes, usually capable of holding around 4 to 6 oz, give or take. But you're only going to spill some of those precious ounces in one of those...