According to new data from the Health Department, it looks like people living in the southern parts of Manhattan are the city's biggest lushes. The agency released data from their 2012 survey of 8,500 city residents across the five boroughs. Results show that residents who fit the new definition for binge drinking were more likely to live in the Union Square, Chelsea, Greenwich Village and Lower Manhattan zip codes. Duh.

Of the population polled in those areas, around 32% admitted to having consumed five or more alcoholic drinks (for men) or four or more alcoholic drinks (for women) in one sitting sometime in the past 30 days. Not to be outdone by their downtown counterparts, 29% of responding Upper East Siders hit the bottle in a meaningful way with nearby East Harlem residents coming in at 27%. 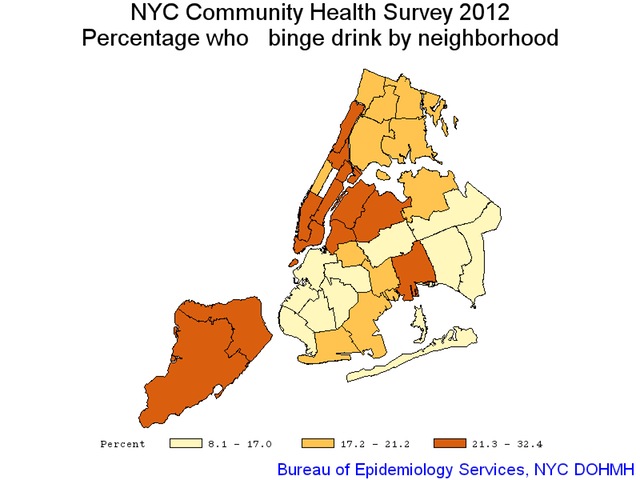 Congratulations to the squares reasonable imbibers of Bayside, Little Neck, Fresh Meadows and Borough Park, where only 8 to 9% of those surveyed had reported an episode of recent binge drinking.

Binge drinking in the city has been on the rise, with about 19% of the population reporting a binge drinking episode in 2012, up from around 15% in 2010. On top of that, the CDC recently induced a massive guilt trip by defining anyone who drinks 15 or more drinks on average (men), or eight or more drinks on average (women), per week as a "problem drinker." Hey, we're just trying to live, man.

#binge drinking
#doh
#health department
Do you know the scoop? Comment below or Send us a Tip
A new Gothamist is coming! We’ve moved comments over to our beta site. Click here to join the conversation and get a preview of our new website.