Here's What To Order At Eggslut, The Insanely Popular L.A. Joint Opening In SoHo This Friday morning at 7:45 a.m. the new Chefs Club Counter flings opens its doors in SoHo, and while the lineup of contributing chefs will be a solid addition to the local food scene, it's really all about Eggslut. The Los Angeles-based egg sandwich restaurant is hugely popular on the West Coast; LAist describes the daily scene as "comically mobbed," noting that the lines are "long AF" and that the place "consistently has the longest line (by far) at its Grand Central Market" location. All of this is to say that it's bound to be a huge hit when it (temporarily) opens in NYC.

The restaurant's owner and chef Alvin Cailan has strong ties to NYC, having spent summers here as a kid visiting family in Harlem and in Jersey City. His connection to the city inspired him to create the NYC-specific "SoHo Salmon" sandwich, which debuts Friday alongside his proven hits the "Fairfax" and "Slut" (more on those two later).

The bread component of the sandwich took a lot of trial and error, including tests involving bagels, bialys, kaiser rolls and even a brioche bun with bagel toppings. Ultimately, Cailan settled on a bun by Eric Kayser. "It honestly changed the way I thought of milk buns, because his milk buns are soft and fluffy. It's everything that you want in a runny yolk sandwich, because it sucks everything up."

The local smoked salmon is dressed in a sauce modeled after fromage blanc, a fresh French cheese. Cailan makes his with mayonnaise, sour cream and a little bit of cream cheese for that bagel flavor profile. Instead of capers, the sandwich comes with pickled mustard seed for a "burst of flavor," alongside relish pickle, onions, chives, salt and havarti cheese. And a sunny side up egg, of course.

"This is a New York sandwich," Cailan proclaims. "This is what I'd love to eat on the side of the street like I do at Russ & Daughters." 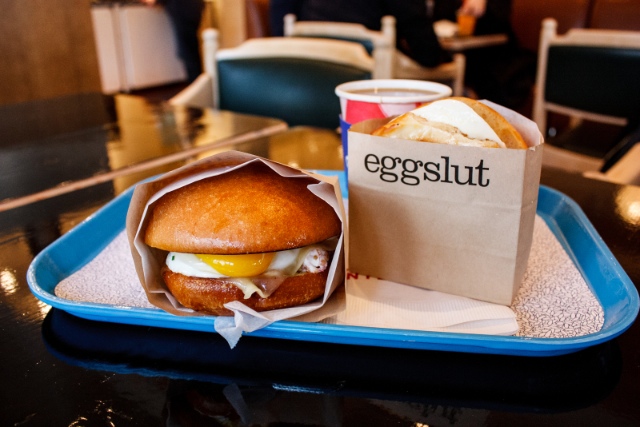 Eggslut's "Fairfax"—a crazy messy combo of scrambled eggs with chives, cheddar, caramelized onions and sriracha mayo on a brioche bun—is also on offer during Chefs Club Counter's breakfast hours, as is their signature "Slut" creation. A coddled egg (super runny, barely cooked) is nestled atop a creamy potato puree, then topped with gray salt and chives with toasted baguette. Compared to the other two ingredient-packed sandwiches, this is the dish that really lets the flavor of the egg shine through.

Asked about the potential mob scene that could descend on the restaurant tomorrow, Cailan said he wasn't nervous, just excited, but conceded that a restaurant opening doesn't always run smoothly.

"There's gonna be problems, people are going to wait, that's just the nature of the restaurant beast," he says. "There's no such thing as a restaurant that's firing on all cylinders when they open, that just doesn't exist."

For now, Eggslut has a three-month residency inside the new Spring Street cafe, but Cailan isn't coy about his future on the East Coast. "If we kill it, who knows, there might be an Eggslut New York flagship."

#chefs club counter
#eggslut
#soho
#original
Do you know the scoop? Comment below or Send us a Tip