Here's What Chef Jessica Koslow Of L.A.'s Sqirl Is Cooking For Her NYC Pop-Up

Since the start of the summer, the Seaport Food Lab has been hosting chefs from across the country (and some locals, too) for pop-up dinners showcasing fare otherwise inaccessible without a plane ticket. Starting Sunday it's chef Jessica Koslow's—of L.A.'s super hit Sqirl—turn in the kitchen, where she'll be cooking up potential dishes for her forthcoming restaurant Tel, also in Los Angeles.

Koslow says the dishes she'll serve in NYC are ones she's been "playing around with" in anticipation of the new restaurant, which will open sometime next year. While she's known as the "breakfast queen" for dishes like her beloved ricotta toast—as well as a background in preserving—it's dinner on offer at the Seaport, with five courses of what Koslow describes as a reflection of the "global migration of the Jewish people, my heritage; it's about the flavors, dishes, and techniques acquired throughout the world, yet redefined under a California lens." 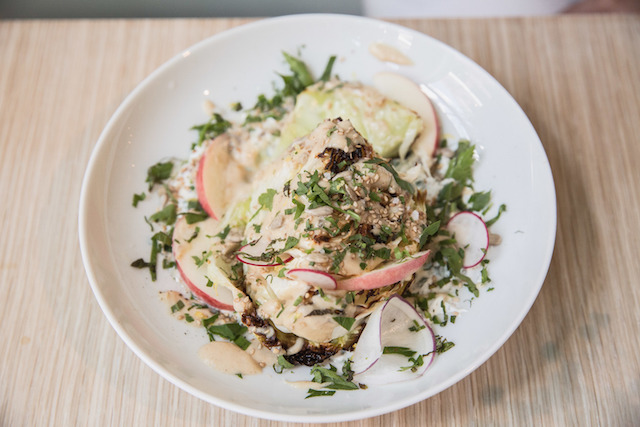 While L.A. prides itself on its healthful produce, Koslow has taken advantage of the New York area's robust farm community, employing several local purveyors for her dinners. With help from Greenmarket co-founder Bob Lewis, Koslow has been able to source nightshades and brassicas from Breezy Hill Orchards and Rogowski Farms; stone fruit and cider from Hudson Valley Farmhouse Cider; and Armenian and Persian cucumbers from Clinton Point.

Will all this lovely produce sway Koslow into opening a restaurant in NYC? "I love New York," she tells Gothamist. "A good motto I have….Never say never."

Jessica Koslow will be cooking at the Seaport Food Lab August 20th through September 2; see here for reservations ($100)