What did Allen Ginsberg cook up while sweating the days away in his apartment during hot New York City summers? A meal he deemed "Suitable for Summer Dinner": a cold borscht. His recipe has been passed around recently, and thanks to that, you can make it on your own this summer:

And in the man's own handwriting: 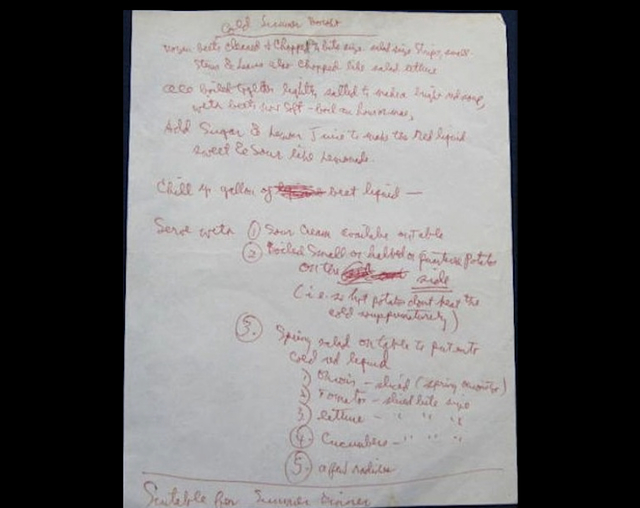 It seems Ginsberg was a big soup man, and weeks before he died he had made fish chowder for some friends, which was discovered in his apartment after his death—in this New Yorker piece from 2001, it says "about the only trace of Ginsberg remaining on East Thirteenth Street was the leftover fish chowder." At the time, the loft that housed the Allen Ginsberg Trust still contained two jars of the soup in the freezer—"Bob Rosenthal, Ginsberg's secretary, says that he felt pangs of grief tossing out the poet's dried beans and stale kasha, and just could not bring himself to throw out the soup." [Dangerous Minds via Open Culture]

#allen ginsberg
#cold summer borscht
#recipe
#soup
Do you know the scoop? Comment below or Send us a Tip
A new Gothamist is coming! We’ve moved comments over to our beta site. Click here to join the conversation and get a preview of our new website.