Here Are All The Restaurants Offering Sidewalk Seating In NYC

Sidewalk cafes: where creepy internet people congregate to let strangers leer at their meals while trucks blow toxic fumes into their bolognese. For some reason, people love these things, so much so that many food service establishments are keen to erect them outside their place of business to lure diners during warmer months. To track the proliferation of these outdoor seating areas, the city's Department of Consumer Affairs has released an interactive map that shows both active and proposed sidewalk cafes. AKA: a guide to which sidewalks to avoid on gorgeous summer days.

The DCA's commissioner Julie Menin told Crain's the map's goal is to help businesses better understand the license process and to have a visual aid to appreciate how sidewalk cafes impact certain blocks. There are currently 1,357 sidewalk cafes operating in four boroughs—there are no licensed sidewalk cafes on Staten Island—with SoHo and Greenwich Village topping out with 232 active cafes and 43 in the application phase. The Upper East and West Sides round out the top three, with 160 and 152 active cafes, respectively. 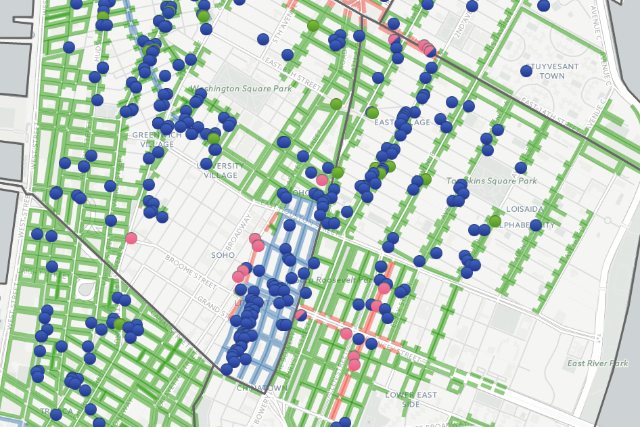 Over the years, the city has made efforts to curtail sidewalk cafes, often by not renewing a businesses's permit. Locals in cafe-dense neighborhoods have loudly complained that the outdoor seating interferes with their lives, causing sidewalk congestion and other blights. Truthfully, we don't understand why anyone would voluntarily occupy a seat at a sidewalk cafe, when at every moment street detritus could come swirling into your goulash. Backyards for life.

#interactive map
#map
#sidewalk cafes
Do you know the scoop? Comment below or Send us a Tip