Remember in the mid-aughts, right after the original Momofuku really caught fire, and it seemed like a new ramen spot was opening on every other block in the East Village? Well now a different sort of noodle is blowing up in these parts, with more than ten new restaurants opening over the past year that either prominently or predominantly feature rice noodles on the menu. Rice noodles travel under different names (rice vermicelli when round, fen in China's Guizhou province, mixian in the Yunnan, bahn pho in Vietnam) but they're almost always thin, slippery, and, of course, gluten free. Most important, all of the establishments below use them to good effect. 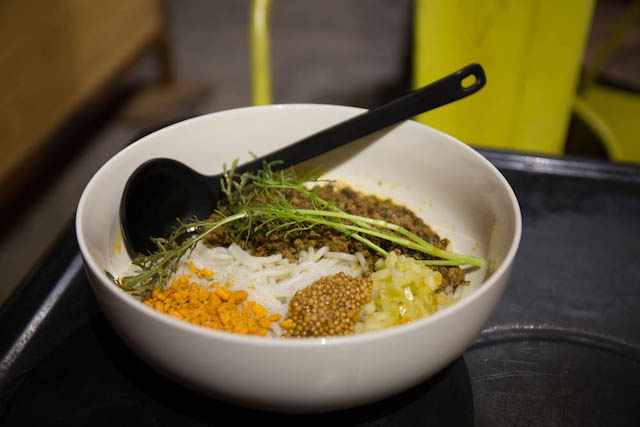 Little Tong Noodle Shop
Ambitious and delicious—but still remarkably inexpensive, especially since prices include tip—Simone Tong's full-on charmer made several Top 10 lists in 2017, including Pete Wells's in the Times. And with good reason: all of the half-dozen or so mixian options are terrific here—inventive, deftly constructed, and served with love. Order any of Tong's "Little Eats" with confidence as well, though the Ghost Chicken is probably my favorite. If this is your neighborhood spot, you are a fortunate human being. 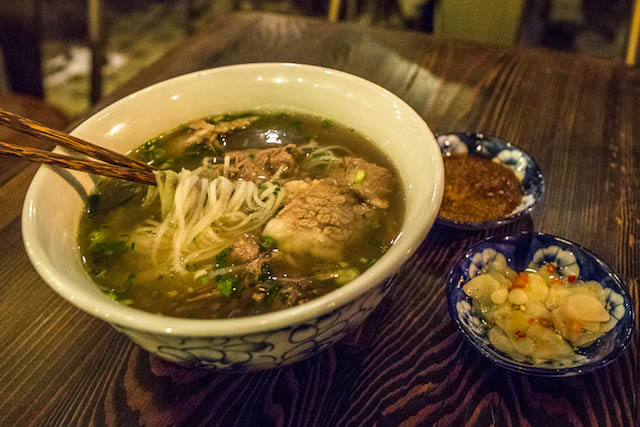 Hanoi House
Another critical darling, Hanoi House is still packed nightly and festive-feeling a year into its run on St. Marks. There are lots of very good things to eat here (the Papaya and Pig Ear salad, the Spicy Octopus appetizer, the Shrimp and Sweet Corn entree, for example), but the highlight for me remains the dense and deeply satisfying Hanoi Style Beef Pho ($15). Add bonus meat if you want (marrow, oxtail), but the baseline bowl is already plenty filling, and makes for a terrific quick dinner at the bar. 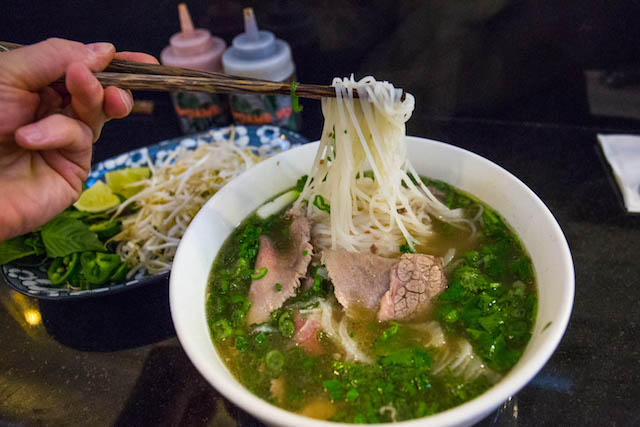 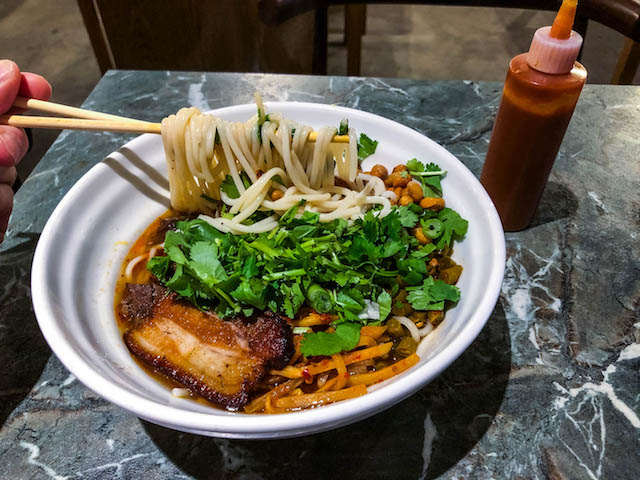 Yuan
The "Soup Mi Fen" section of Yuan's menu is where you want to spend your time here. Yes, there's dim sum available, as well as a few other starters, but the stars are the Guilin-style noodle bowls, with or without broth and laden with funky, sometimes fiery delights. You can almost always be seated without waiting, too, even a four-top on a Saturday night, which can be key in this party-hearty neck of the East Village woods. 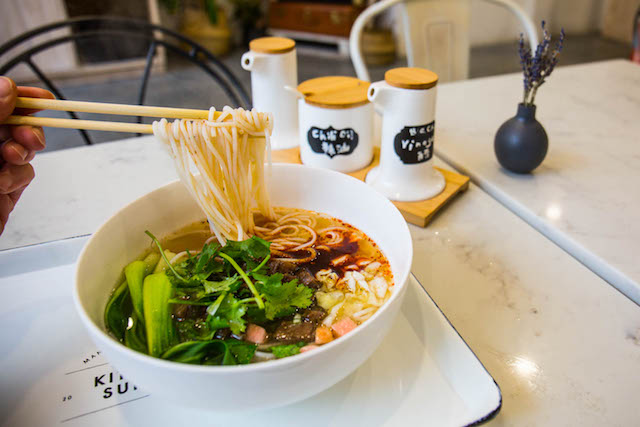 Just For Fen
This is possibly the cutest counter-service spot in the East Village (in a charming, not insufferable, way), and the Guizhou-style fen bowls are packed with fresh, house-made ingredients. The noodles are slick, the broths (beef, lamb, vegetarian) dense with flavor, the meats fatty and tender, the veggies bright, and the many pickled things adding welcome hits of acid to the party. 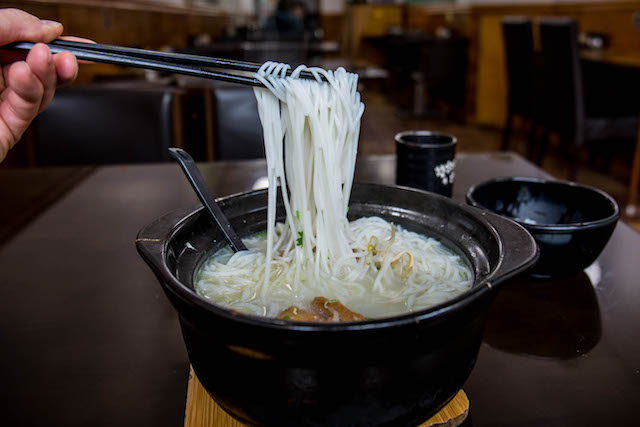 Deng Ji II
This no-frills joint, a sequel to the Flushing original, features a lengthy menu of marvelous Yunnan-style mixian, with ample bowls available in almost every conceivable variety (the place seems to share a kitchen with a more general Chinatown restaurant next door with the same address, so there's a wealth of ingredients on hand). It's all gloriously inexpensive too: the XiuCai GuoQiao, for example, pictured above and packed with bouncy noodles, fried pork skin, sliced chicken, loads of ginger, and spongy tremella fungi, will cost you less than ten bucks. 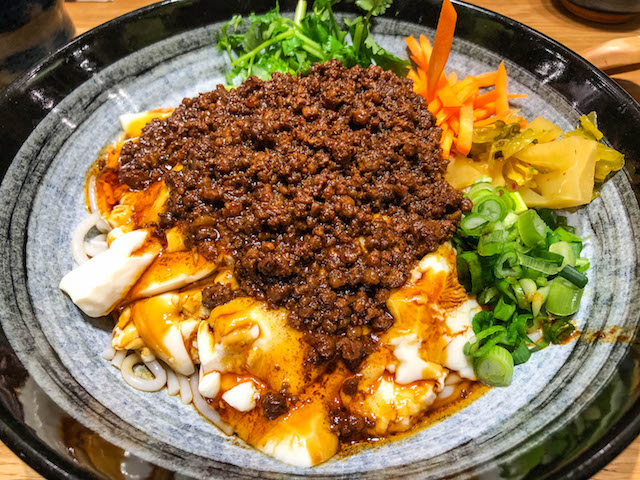 South of the Clouds (Scott Lynch/Gothamist)

South of the Clouds
The Sunset Park favorite Yun Nan Flavour Garden opened this updated offshoot in Greenwich Village earlier this year, and locals have been packing the place ever since. There are winners all over the tightly-focused menu, but though some will tell you that the oily Tofu Pudding Rice Noodle (pictured) is the way to go, I would recommend the signature Crossing the Bridge Noodle, which is not only deeply satisfying and delicious, but it's also fun—the dish's many ingredients arrive in separate dishes and are brought into a bowl of steaming, chicken-based broth right before your eyes. 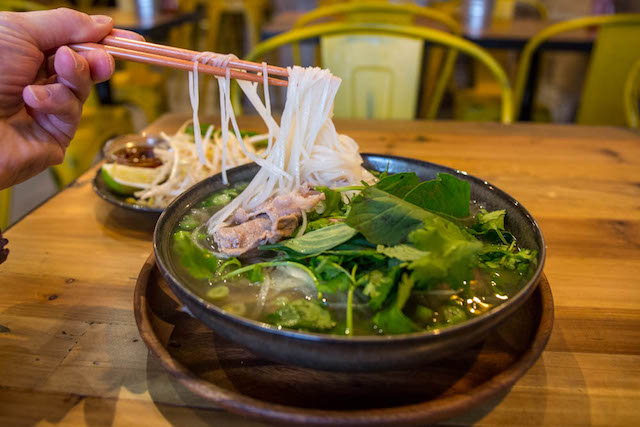 Ginger and Lemongrass
The award for the most unlikely winner in the rice noodle restaurant category has to be Ginger and Lemongrass, a trendy-rustic spot on Rivington Street run by chef Petra Rickman (she's Czech, and had never even tasted pho until six years ago) and Michael Prelovsky (he's Slovakian, and opened their first G & L in Whitestone). But what do you know, the pho here is truly first rate, starring a broth that shows real complexity and character, and noodles cooked to exactly the right degree of slippery but firm. The curries are solid too.

Located at 153 Rivington Street between Clinton and Suffolk (646-876-1237; gingerandlemongrass.com) 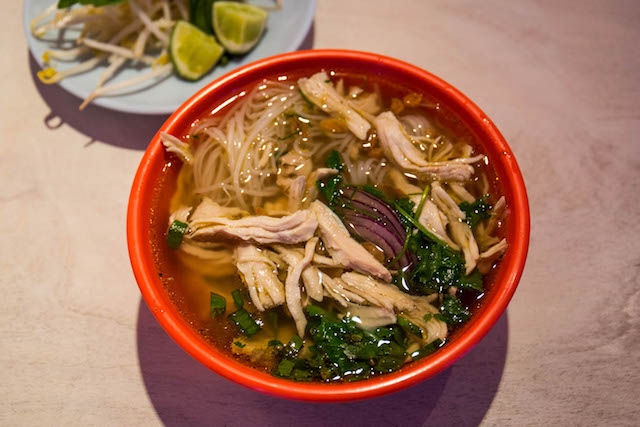 Bep Ga
Small, stylish, and enthusiastically reviewed, the pink-tinged, Vietnamese Bep Ga serves a wonderfully restorative bowl of chicken rice-noodle soup and, honestly, not much else. But the soup is terrific! Lots of slippery noodles, chunks of chicken poached in ginger, fish sauce for tang, bean spouts for crunch, brightened with herbs, and add a hard-boiled quail egg as a nice little bonus. 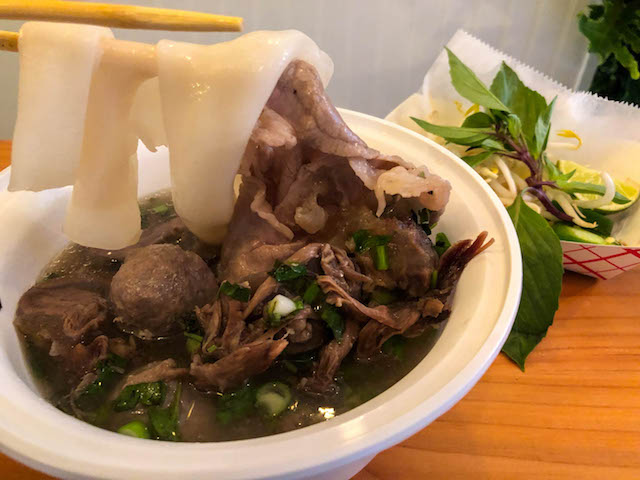 Zen Yai Pho
The East Village gets a taste of Sunnyside with this tiny, plant-filled offshoot of the Queens pho favorite. Zen Yai's $14 signature bowl is packed with the shop's notably wide noodles and an generous array of tender, pleasantly funky, sometimes quite gelatinous meat (eye round, shank, tendon, ox tail, "beef balls"). It's more than enough for a meal, but make sure you also get an order of loaded-up fries, which instantly qualify as some of the best—and maybe even the absolute best—spuds in the neighborhood.

The best fries in NYC—crisp, fluffy, full of actual potato flavor—might be at this tiny, brand new East 6th Street pho shop, Zen Yai. Pictured is the loaded-up Bahn Mi ($5) with pickled veggies and kewpie mayo, but there’s also a Kimchee one, and a “Sunnyside” with bacon and runny egg.

Located at 518 East 6th Street between Avenues A and B (zenyainoodle.com)

#east village
#rice noodles
#original
Do you know the scoop? Comment below or Send us a Tip
A new Gothamist is coming! We’ve moved comments over to our beta site. Click here to join the conversation and get a preview of our new website.