Here Are 4 Tantalizing Food Events To Try This Weekend

Crawls, bites, tours, tastes—we can't get enough of them in this town. There are two such food events happening this weekend alone, starting with Taste of Brooklyn Bridge, which offers a tour of the area's dining outposts. For $20 you get seven samples of local eateries, including half a lobster roll from Luke's Lobster, a Godfather Part II slider from No. 7 Sub and an entire small margarita pizza from Fornino. Other vendors include Calexico, Ample HIll and Blue Marble and the Brooklyn Bridge Garden Bar even offers their Autumn Harvest Cocktail to every taster. Pick up these delicious eats both Saturday and Sunday from noon until 6 p.m.

A little nabe in Manhattan also wants to highlight its local restaurants with Taste of Gramercy. On Saturday from 11 a.m. to 3 p.m. the Gramercy Neighborhood Association takes over Irving Place to help dish out eats from L'Express, Friend of a Farmer, City Crab, Casa Mono and dozens of other area eateries. In case of any leftovers, the GNA partnered with the Bowery Mission to make sure any uneaten food would go to help the homeless. If you buy your tickets before midnight tonight they'll run you $40, otherwise you'll pay $50 at the door. 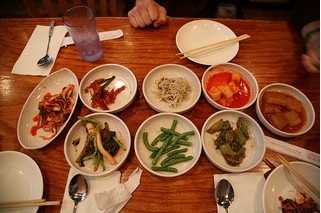 The Korean Harvest Festival comes to Randall's Island this weekend for two days of celebration for all things Korean. Often thought of as a kind of Korean Thanksgiving, Chusok, as the festival is known, features many vendors selling all kinds of delectables like kimchi, pajeon (Korean pancake stuffed with seafood), dumplings and other kinds of soup, rice cakes and meat dishes. Look out for the songpyeon, a hallmark of the festival; you'll recognize the half-moon dumplings because they're steamed over pine needles! In addition to the eats, take in music and performances at what is one of the largest Korean American event in the United States, which takes place Saturday and Sunday from 11 a.m. to 10 p.m.

Given our newly discovered love for Danish cheese, we're equally excited about this weekend's Red Sausage Event taking place at TriBeCa's Aamanns-Copenhagen. Though it's equally as prevalent in Cophenhagen as the NYC dirty water dog is here, Danish street sausage stands apart with its bright red color and equally vibrant toppings. Try yours topped with fried onions and sweet pickles on Sunday from 2 p.m. to 6 p.m.

#food events
#korean harvest festival
#taste of brooklyn bridge
#what to do this weekend
Do you know the scoop? Comment below or Send us a Tip