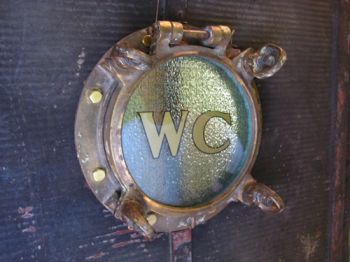 Heath Ledger, currently in the spotlight for his role as Joker in The Dark Knight, has also posthumously anchored down his Brooklyn presence in a new nautical-themed bar. The designer behind it, John McCormick, also designed one of Ledger's Manhattan hangouts, the Beatrice Inn.

Down by the Hipster first reported the Greenpoint bar (located on the corner of Lorimer and Bedford) and has now followed up with some photos of the joint. They note that Ledger "was a key backer of the the project and was going to be a full partner. His untimely death put the project in jeopardy, but his father became executor of the estate and because he knew how much the project meant to Heath, he released the funds to finish construction."

Currently called The Five Leaves (after "Swan cigarette papers that tell you when there are just five left in a package"), it's slated to open within the next few months. No word on what Michelle Williams may think about this, but last month it was reported she was worried Ledger’s father would blow the millions before the ex-couple's daughter, Matilda, reached 18.

Photo of The Five Leaves exterior via Down By the Hipster.

#bar
#brooklyn
#greenpoint
#heath ledger
#The Five Leaves
Do you know the scoop? Comment below or Send us a Tip
A new Gothamist is coming! We’ve moved comments over to our beta site. Click here to join the conversation and get a preview of our new website.