The latest Quick Bites brings us to Alphabet City for incredible pastrami and EELS!

THE VIBE
Ducks Eatery has been around for three years now and it consistently offers one of the most interesting menus in the East Village, thick with things like pig ears, smoked mussels, nasi ulam, and whole goat neck (for two). But whenever co-owners Julie and Will Horowitz—siblings who share the same birthday four years apart—would bring their show on the road to the Hester Street Fair, for example, it was their Pop's Pastrami Sandwich that everyone got excited about.

Clearly the Horowitz kids needed a more permanent outlet for their smoked meat masterpiece, but instead of just throwing together something simple like a to-go lunch window in front of Ducks, they gave us Harry and Ida's Meat and Supply Company, a general store/sandwich shop/smoked-food lab all in one. Named after their great-grandparents (Harry is the "Pops" of the pastrami), the irresistibly charming space on Avenue A serves as a homage to the Delancey Street delicatessen Harry and Ida ran almost 100 years ago, even as it embraces a spirit of contemporary fun and adventure. 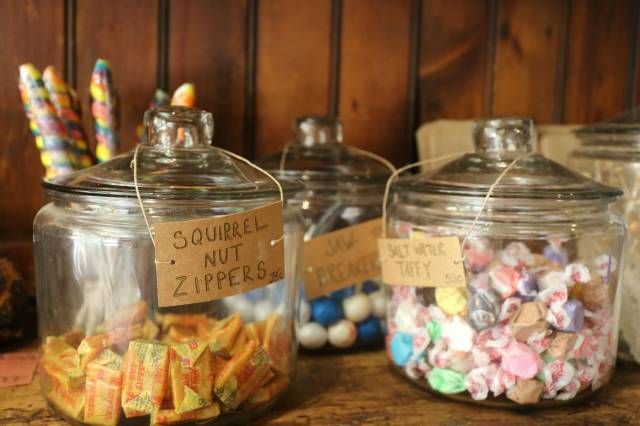 The ceiling-high wooden shelves here are filled with strange and/or delightful discoveries—squirrel nut zippers and other ye-olde candies, pickled (and spicy!) frog legs, outmoded camping accessories, playful taxidermy—that make it a place to browse and linger even if you're not getting a sandwich. The indie/bluesy soundtrack comes from a speaker housed within a vintage-looking radio. Your affable hosts working the counter are pleasantly chatty, and someone may even offer you a tour of the back (eel tank, drying cabinet, trays of skinned rabbits) adding to the welcoming, local-community-store atmosphere.

Because Harry and Ida's falls under the aegis of the Department of Agriculture (which oversees retail food establishments) as opposed to the Department of Heath (which does restaurants), they are not allowed to provide any seating, though there is a small counter by the front window at which you can stand. And while this may seem like an ill-advised business decision for a restauranteur, the pros far outweigh the cons for Horowitz and his crew, who are allowed under Agriculture rules to more fully pursue and experiment with the "heritage techniques" of smoking, drying, fermentation, and aging that are his current passion. 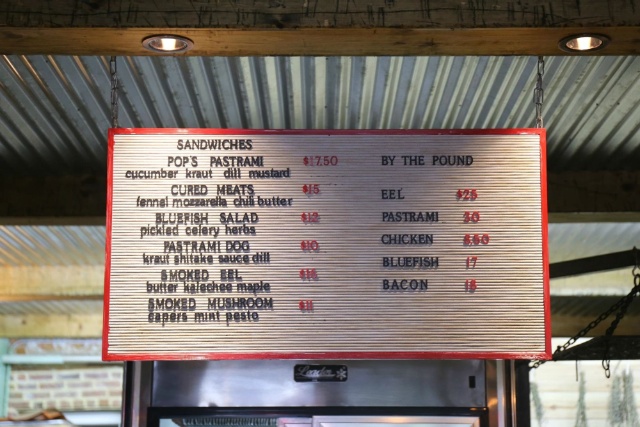 THE BITES
The Pop's Pastrami Sandwich is the reason you're coming to Harry and Ida's, and if you didn't know that before you walked in the door, the staff will convince you with an unrequested sample-sized chunk of the meat just to get you hooked. And really, no matter how much hype you've heard about it, you will not be disappointed. The smoked, burnt-end brisket is wonderfully tender, heavily peppered, and beautifully marbled, the sandwich brightened by a crunchy cucumber-based kraut, sprigs of fresh dill, and enough seedy mustard spread onto the slightly toasted hero to really feel it.

At $17.50 it's an expensive sandwich, no question—it's more in line, money-wise, with a high-end burger than your usual deli lunch or post-bar buy. But it's also plenty large and rich enough share. It's also just flat out better than the majority of (usually higher-priced) restaurant entrees I've had over the last however many years, so there's that too.

If you've already eaten the pastrami five times and want to try something different, the second best selection at Harry and Ida's is the Smoked Eel, which are slaughtered and prepped right there in the back. They come out buttery-soft and intense and just to add to the taste explosion, come topped with fermented "kalechee" and maple syrup. This could have been simply overwhelming, everything canceling everything else out, but they pull off the flavor-balancing act with aplomb.

Less successful is the Cured Meats Sandwich. Though composed of delicious-sounding ingredients—two kinds of ham, fennel mozzarella, chili butter—it tastes mostly just like smoke. Better in the pork department is the take-home bacon, which is sliced in slabs and, though also heavily smoked, retains plenty of pig flavor when fried to near-crisp and paired with your favorite eggs.

One more take-away item of note: according to a reliable source who received a big bag of the chewy, peppery hunks recently in a care package, the Pastrami Jerky is "amazing" followed by a variety of rave-review emojis.

THE VERDICT
The pastrami alone makes Harry and Ida's a destination "restaurant" for anyone who loves sandwiches, or meat, or great food—even though it doesn't come with a place to sit and eat it. And Will Horowitz is a bit of a New York City treasure, with endless energy and an infectious enthusiasm for whatever he cares most about at any given moment (he's lived in a treehouse in Burma; he was a pro table-tennis player in Nepal) which, luckily for us at the moment, happens to be experimenting with classic food preparation and cooking techniques in the East Village.

#alphabet city
#duck's eatery
#east village
#general store
#harry and ida's
#pastrami
#original
Do you know the scoop? Comment below or Send us a Tip