There have long been many great ramen restaurants in this city, of course, and the rice noodle scene—whether bahn pho, mixian, or fen—has also really exploded in the past few years. Serious udon restaurants, however, specializing in those fat, round, wheat flour noodles, still remain a much rarer breed. Which is why this week's opening of Hanon, on Union Avenue in Williamsburg and featuring more than 20 separate udon dishes on the menu, is definitely cause for excitement among NYC noodle heads.

Hanon's origin story is a bit unusual for a restaurant. Or for anything, really. Back in Japan, a film production outfit called Rock'n'Roll Japan teamed up with the venerable Sagami Rubber company, which is famous for making the thinnest condom in the world, to do an ad campaign. Which then apparently won an award at Cannes. Which prompted the team to go into the udon business? They opened their first restaurant in Kamakura, a city known for its soba, which was such a success they decided to expand their operation to the "center of the world, NYC." And so, enlisting the help of Yudai Kanayama, who worked on the launch of East Village's Izakaya and the great Davelle on Suffolk Street, they've done just that, with Hanon.

There are two kinds of udon available here, the pale Zenryufun and the green Sasauchi, which gets its color from both bamboo and barley leaves. Both are made on premises from fusama and haiga, a wheat bran and wheat germ that are reputedly low fat and high protein. The dishes are divided about equally between hot and chilled; the former come in the familiar steaming bowls of broth and are packed with fish, vegetables, and/or meat, depending; the latter is served dipping style. 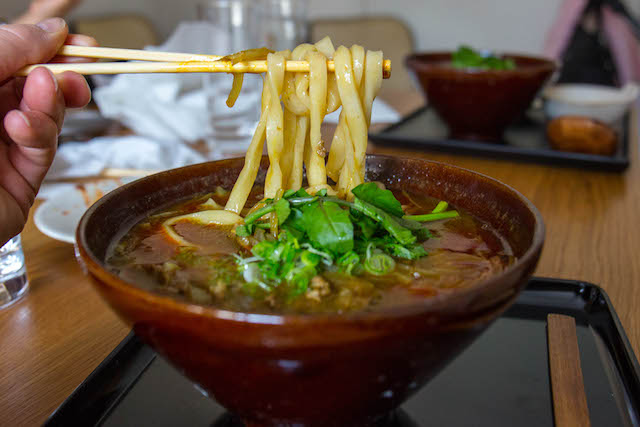 I tried three udon dishes at a special preview meal over the weekend, and all were finely crafted and varied enough in flavor to keep things interesting. There was a lively Washu-Gyu Curry Udon on our table, filled with thinly sliced beef; a revitalizing Tori and Kinoko Udon, the soup thick with chicken and mushrooms; and a light and refreshing Tempura Seiro, the green noodles served with a cool dipping sauce and a small pile of shrimp, fish, and vegetable tempura on the side. Duck breast, greens and avocado, whipped mountain yam, uni, spicy cod roe, braised pork, and pickled plum are among the many other udon toppings and mix-ins available.

There are other, non-noodle things to eat at Hanon as well. The snackable Rice Balls arrive unwrapped, flavored with salmon, pickled plum, or kombu seaweed, and are all excellent. Rice is also paired with tempura or beef in a pair of entree-sized Gohan Mono options which, in addition to tasting good in and of themselves, are also solid options for the gluten-averse in your life. A few large salads and two types of Karaage, or fried chicken bits—one spicy, the other sweet—round out the menu.

The space itself is pretty spiffy, with a row of tables along a chartreuse banquette on one side, a bar on the other, and a private room for larger parties in the back. There's also a huge outdoor patio, which will likely be pleasant come April or May. Minimalist plant life and several framed works of art (including a Cy Twombly of all things) complete the picture.

#hanon udon
#williamsburg
#original
Do you know the scoop? Comment below or Send us a Tip