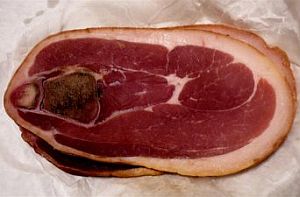 The area of Brooklyn’s Atlantic Avenue that stretches through the East New York/Stuyvesant Heights area isn’t exactly a culinary destination, but what it does have is the Carolina Country Store, a one of a kind grocery that has been covered here before. The tiny storefront is also favored by chefs like Zak Pelaccio, primarily because it specializes in southern style ham and cured meats that are hard to find elsewhere in the five boroughs.

Salty, bone-in country ham ($4.59/lb; pictured) is cut with a huge band saw on premise; steaks are cut 3/8” thick and looking like they came straight out of a cartoon. Sausages, souse (a favorite of the Village Voice’s Robert Sietsema), red franks, smoked turkey wings, jowls, regular and peppered bacon are stacked in the refrigerated display. The Carolina Country Store also sells liver pudding in vacuum packed slices. You can choose and bag your own smoked ham hocks. 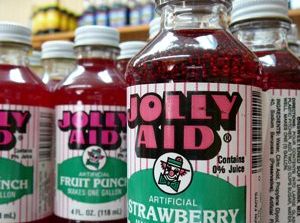 No matter how rare they may be round these parts, avoid the desiccated, half-Pop Tart, half-Wonka Banana Planks (50¢), which taste like the leftover residue of a bottle of a bubblegum flavor mixing vat; wafer-like Smilin’ Jacks cookies are available behind the counter for 10¢ each.