Ground Beef, Chicken Are The Meats Most Likely To Land You In The Hospital 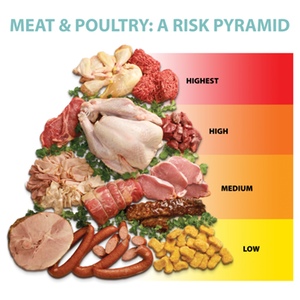 Meat Risk Pyramid (via Center for Science in the Public Interest

The study also concluded that not only are chicken and ground beef the riskiest meats to be serving at your backyard bbq, the infections caused by contact with E. Coli, Salmonella and Clostridium perfringens—the three common bacteria found in those meat products—are the most severe of any kind of infection found in other meat products.

Also topping the list are other cuts of beef—excluding roast beef—steak and turkey, which are all classified as "high risk." On the safer end of the spectrum are barbecue—unless it's chicken—deli meats, pork and roast beef, which are classified as "medium risk."

After years of being told that fast food and nitrate-laden processed meats were the enemy, the study does give us some "good" news in that department. If you want to keep your gut free from harmful, diarrhea-inducing bacteria, your best bets are sausage, ham and…chicken nuggets. Yup, everyone's favorite shaped chicken parts are very unlikely to make you sick, though the Center cautions that while "chicken nuggets are generally safe…[they're] not that
nutritious." Yeah, no duh.

#bacteria
#Center for Science in the Public Interest
#chicken
#chicken nuggets
#ground beef
#hospitalization
#meat
Do you know the scoop? Comment below or Send us a Tip