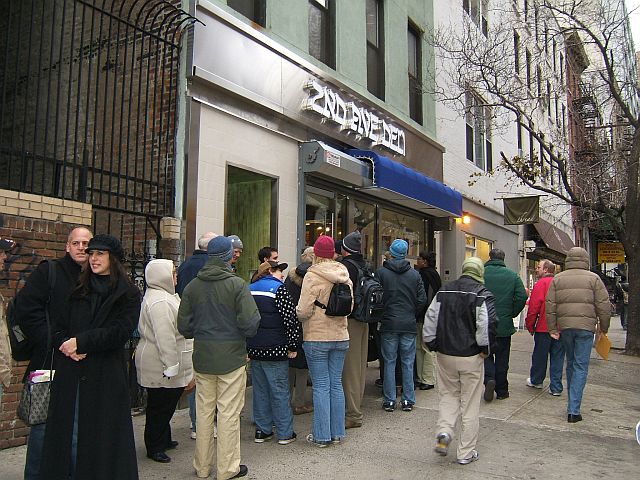 The initial news of the legendary 2nd Avenue Deli’s reincarnation led us to stockpile Lipitor as visions of pastrami, chopped liver and gribenes danced through our heads. And when we feasted our eyes on the sneak preview of this fresser’s paradise, we could hardly wait to go and devour more of the menu.

Even though it’s been open for a little more than a week, Gothamist paused to recover from holiday feasting before hitting the deli’s new digs around the corner from Yeshiva University. Truth be told, our period of self-imposed restraint was remarkably brief. On the blustery day after Christmas we queued up behind 20 people on a line that stretched toward the corner of Third Ave. and 33 St.

We were joined by Hill Country pitmaster Robbie Richter, best known as the man behind the city’s most succulent brisket. In addition to being well-versed in the smoky arts of Texas ’cue, Richter is no stranger to savory deli delights thanks to growing up Jewish in Rego Park. A platter of triangular slices of rye bread schmeared with chopped liver being passed down the line, brightened the mood of the waiting throng. We’re still not sure whether this nosh was designed to sell chopped liver or prevent a riot.

Trying such deli standbys as a pastrami sandwich, matzoh ball soup and a more substantial portion of the ethereal chopped liver was a given, but what we really craved were gribenes, or crunchy fried chicken skin. We like to think of it as kosher crackling. Richter was also quite eager to nosh on this fried treat that owner Jeremy Lebewohl offers diners as soon as they’re seated. We’re not sure if there’s a Yiddish word for amuse bouche, but one thing is certain, there was no chicken skin to be had that afternoon. 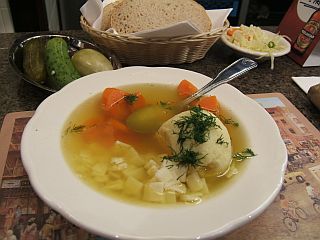 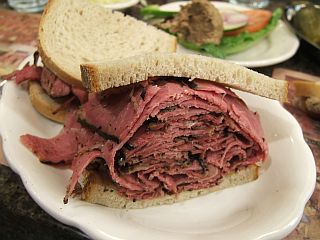 Our chicken skin sadness was momentarily dispelled by tucking into an app of chopped liver and slurping down a matzoh ball soup whose central player was among the lightest we’ve ever had.The hefty pastrami sandwich brightened our spirits, but our jones for crispy chicken skin lingered. Warm buttery cinnamon rugelach made us forget about the elusive kosher crackling. That is until Jeremy Lebewohl approached, and we asked him what gives with the gribenes. Seems his purveyor wasn’t prepared for such an unprecedented demand for chicken dermis. Lebewohl says the deli fried up more than a thousand pounds of the stuff in its first week of business. He did assure us that he was working to remedy the situation and promised us a quart of crunchy chicken skin our next visit. While Gothamist would never hold him to this generous offer, we were heartened to learn that Lebowohl's deli take on the amuse bouche was back on offer as of today.

For some reason Gothamist thinks the 2nd Avenue Deli won't have the same problem meeting the demand for calves' feet. They’re the key ingredient in a decidedly old-school app called ptcha, a cold gelatinous concoction mixed with spices that resembles head cheese. Since the deli's open 24 hours, Gothamist might have to see if a combination of gribenes and ptcha wards off hangovers. Richter told us he'll pass on the ptcha.