Earlier this year the restaurant by CHLOE opened on Bleecker Street, bringing the best vegan everything to Greenwich Village. But the absolute best thing they have to offer can't even be purchased on its own: the bacon.

Their vegan bacon is made out of shiitake mushrooms, and it only comes as a sparse topping on the Kale Caesar Salad and the Mac n' Cheese (we're told you can ask for extra on the latter). There are currently no plans to sell giant bags of this magic separately, or to make it an added topping for other dishes, so we asked for the recipe.

Before making this on your own, you should probably try by CHLOE's version first so you get it right. What are you looking for in the result? The mushroom bacon should be firm and crispy, but also a little tender, with a texture similar to real bacon. It should also taste exactly like bacon. Seriously! The similarities are insane, especially considering no artificial bacon flavor is used. And my god, it's beautiful. 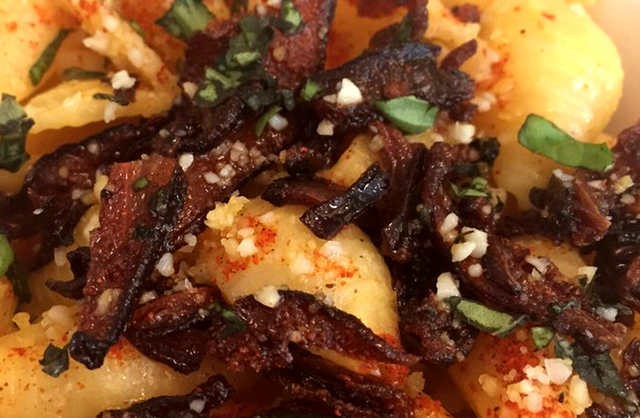 Close up! (via Yelp)

From Chef Chloe Coscarelli of by CHLOE.

by CHLOE is located at 185 Bleecker Street and we highly recommend you check it out.

#bacon
#by chloe
#recipe
#shitake mushrooms
#vegan
#original
Do you know the scoop? Comment below or Send us a Tip