Our latest installment of Quick Bites brings us to Rivington Street for some pho.

THE VIBE
A trendy-cute spot on Rivington Street run by an Eastern European couple (she's Czech, he's Slovakian) might seem like an unlikely place to get a great bowl of pho, but there you have it. Ginger and Lemongrass, which chef Petra Rickman and co-owner Michael Prelovsky opened last week toward the quieter end of Hell's Square, is a "contemporary Asian fusion" restaurant that I entered into with skepticism and emerged from (twice!) feeling warm, happy, and satisfied.

This is actually Rickman and Prelovsky's second Ginger and Lemongrass; the first is located in the subway desert of Whitestone, and has been open (and presumably successful) for about a year and a half. And chef Rickman hadn't even eaten Pho until five years ago, when she became smitten by the noodle soup in Prague, and set off on a long knowledge-seeking journey throughout Vietnam and Thailand.

Ginger and Lemongrass features rows of potted plants set at intervals along the exposed brick wall, and yellow metal chairs set before faux-raw wooden tables. A neon sign hangs over the small bar toward the back, because neon signage is practically mandatory these days. The whole thing seems unlikely to work, but I promise you they pull it off. 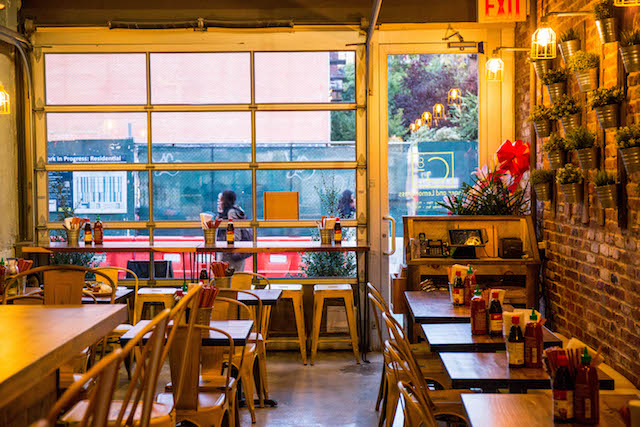 THE BITES
First up, the Ginger and Lemongrass bowl of Beef Pho, which is excellent. The broth has real character and depth to it—not too subtle, not too sweet—the rice noodles are plentiful and slippery but firm enough, the accoutrements (bean sprouts, sprigs of cilantro and Thai basil, homemade chili oil) all lively and bright. You can order it with thin-sliced, rare eye round, with tender, "five spice" brisket, or, in what is clearly the correct choice, a whole lot of both.

Also very good is Rickman's kicky green Thai Curry, which I had with a pile of shrimp and scallops, both of which were plump and juicy, and spooned over some chewy brown rice. Most of the menu is structured as a mix-n-match kind of deal, so you can choose from among several meat, seafood, or vegetarian options to add to your pho, curry, vermicelli bowl, or spicy lemongrass soup. There are several Vietnamese-style sandwiches available as well, but if the merely serviceable Glazed Pork Belly on a baguette was any indication, you can safely skip this part of the proceedings.

Don't skip the starters though. Both summer rolls I ate—one stuffed with grilled salmon and green tea noodles, the other a more common shrimp wrap with a thick, spicy peanut dipping sauce—were delicious. And I tore through my half dozen Sweet and Spicy Chicken Wings, the pleasantly sticky and big-flavored bird bites sprinkled with sliced lotus root, adding both a bit of crunch and visual appeal.

THE VERDICT
The Ginger and Lemongrass menu is filled with terrific, over-performing dishes, and the prices are extremely reasonable for this part of town. This is a welcome surprise for the Lower East Side.

Ginger and Lemongrass is located at 153 Rivington Street between Clinton and Suffolk Streets and is open daily from 11 a.m. to 10 p.m. (646-876-1237; gingerandlemongrass.com)

#ginger and lemongrass
#LES
#Lower East Side
#quick bites
#original
Do you know the scoop? Comment below or Send us a Tip
A new Gothamist is coming! We’ve moved comments over to our beta site. Click here to join the conversation and get a preview of our new website.