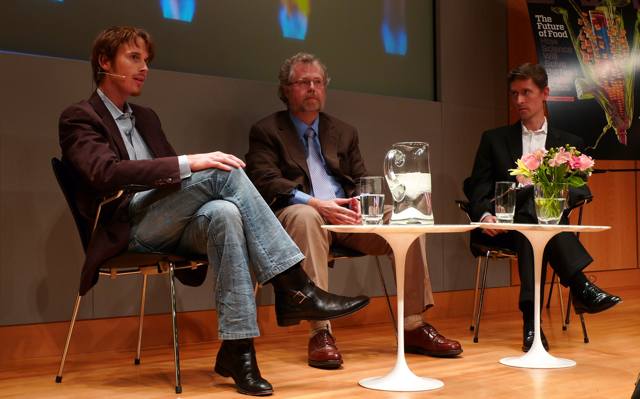 Grant Achatz, left; Nathan Myhrvold, center. Wired magazine editor Mark McClusky at right.
Another day, another chef panel: Last night at the New York Public Library, the chef Grant Achatz met up with former Microsoft CTO Nathan Myhrvold for a talk moderated by Wired magazine editor Mark McClusky. The topic was the experimental and sometimes maligned cooking techniques like the ones practiced by Achatz at his restaurant Alinea and Myhrvold at home in his kitchen/high tech laboratory.

“People tell me, ‘I just like traditional food,’” said Myhrvold, suggesting snacks made by chefs like Ferran Adrià aren’t actually very unusual, despite all appearances. “I tell them they just like old revolutions,” he said. Myhrvold went on to tell the assembled crowd—which included Ruth Reichl, Tim Zagat, and Jeffrey Steingarten—that solving partial differential equations can be beneficial for the future of cooking, a sort of better-mashed-potatoes-through-better-math kind of thing.

During the Q&A, Achatz related the moment of creating one dish on the Alinea menu—a sphere with layers of raspberry, strawberry, Niçoise olive, and violet—as an example of fine-tuning a balance of flavors until they were “exactly right.” But that ‘exactly right’ moment, Achatz noted, remains something of an ineffable taste sensation. “Making profound food is not necessarily the same as making delicious food,” added Myhrvold, who had previously highlighted the connections between frozen bull semen and Dippin Dots.

Another topic discussed was how New York has not been especially supportive of this style of cooking, formerly known as molecular gastronomy. Both panelists offered some theories, and during the audience Q&A, guidebook honcho Tim Zagat promised that NYC would be receptive if Achatz ever opened here. Earlier in the evening, Myhrvold had lightly called New York a “backward, hick kind of place” for its reluctance to accept avant garde restaurants, but then again, this comment came from a genius who did his postdoc with Stephen Hawking, and who now keeps a T. rex skeleton in the living room of his house outside Seattle.