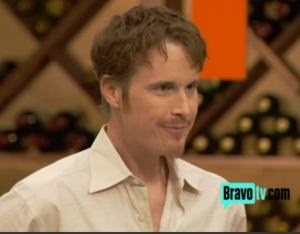 This was your first time judging on Top Chef, right? That’s right.

What kind of experience was it to be on the show? The show is surprisingly unscripted. Of course there were a few scripted elements, but I was shocked by how honest and thorough the judging process really was. There was some serious deliberation about who should be kicked off and who should win. It was intense, and I didn’t expect that.

What’s your insight on the contestants? You know, they’re a really diverse group— a wide range of cooks with a wide range of personalities, and I’m pretty sure that’s why this show works. Jeff, for instance, is probably the closest to the type I would hire for the Alinea kitchen. He takes it seriously, he’s a good cook, and he’s also pretty cerebral about food. You have contestants like Ariane, or like Stefan, who are more part of the private chef/catering side. Then you have guys like Gene, who’s like a cook’s cook. His food was some of the most impressive on this episode, and frankly some of the most creative. You can put that guy in any two star kitchen—I don’t care if it’s New York, San Francisco, or Chicago—that guy’s going to roll up his sleeves, burn his forearms, and bang it out.

You were on the show with the Foo Fighters, who ate food the contestants made in microwaves and toasters. What type of music do you listen to? Not the Foo Fighters [laughs]. Most all of my musical exposure happened in the era of heavy metal and big hair bands— I graduated from high school in 1992, so that was like Guns N’ Roses, AC/DC, Metallica. I just missed Nirvana, Soundgarden, and Stone Temple Pilots kind of bands because that was the time I started working in the hardcore kitchens. In most restaurants you have a boombox in the kitchen, or nowadays there’s an iPod dock. But when you get into those real serious kinds of kitchens, there’s usually no music. I’ve been basically listening to the same music that I was listening to in 1992, because since then I’ve lived this kind of monk-like existence (in the kitchen).

So did you buy Use Your Illusion I and II when they came out? That, and Appetite for Destruction. I was just telling one of our main front-of-house guys like three days ago that I downloaded Appetite for Destruction because I don’t have a copy anymore. The next day he brings in a burned copy of Chinese Democracy and says, “Here, I know you really like Guns N’ Roses, so check this out.”

Did you like it? I haven’t listened to it yet. I’ve been too busy. But I’ll get to it.