A $14.95 oyster dish at the Grand Central Oyster Bar came with a surprise that could be worth thousands of dollars: A diner took a bite of his oyster pan roast earlier this month and found a pearl.

NJ resident Rick Antosh had been dining with a friend on December 1st when he bit into something hard. "For a nano-second I thought I had lost a filling or a tooth, but, holy crap, it is a pearl!" he recalled, according to a publicist for the Grand Central Oyster Bar.

He said the pearl, which has a black spot on it, is "about the size of a large BB or ball-bearing." 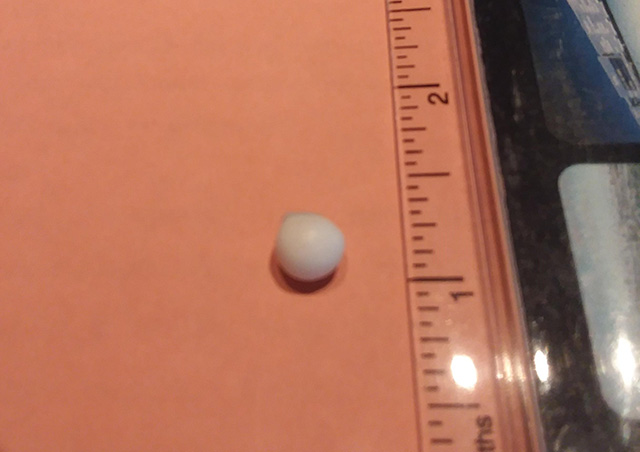 Jewelry appraiser ­Eddie Livi told the NY Post, "Value is based on luster, clarity and roundness," and said of Antosh's pearl, "It is not very round and has a black spot that may or may not be removable. [For] something in this condition, a dealer who really wants it, ballpark, may pay $2,000 to $4,000."

How rare is this? Some say chances of finding a pearl in an oyster are one in 12,000; the Post also spoke to an oyster physiologist who said, "Among pearl producers, some species can produce a pearl that is the size of pea in less than one year; however, environmental and genetic factors play a role on the growth rate. The occurrence of natural pearls in oysters is not well understood, but anecdotally it has been estimated as 1 in 10,000."

The Grand Central Oyster Bar says that about 5 million oysters are consumed there annually, and executive chef Sandy Ingber says that he could only recall a few times where a diner had found a pearl in an oyster. In 2015, a woman dining at a Tennessee restaurant found 50 (very tiny) pearls in one oyster.

#grand central oyster bar
#oyster
#pearl
Do you know the scoop? Comment below or Send us a Tip