National Ice Cream Day is Sunday, July 21st, and to help you celebrate this fake holiday, and navigate the many, many ice cream choices in NYC (there's even vegan anti-anxiety ice cream now!) we've put together a list of our favorite scoop/soft serve shops around town. (Companion reading: our most recent Best Ice Cream In NYC list.) 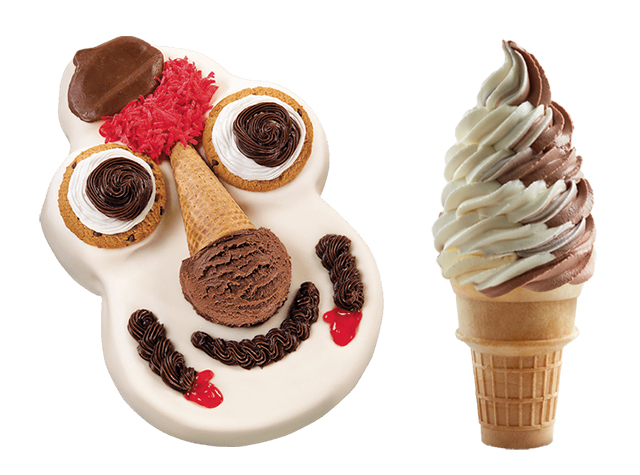 Your favorite ice cream is likely whatever one first melted all over your hands as a youth—nothing tastes better than the sweet pain of nostalgia. For me, it was a cone of Carvel soft serve. Sure, I dabbled in some M&M ice cream from the old Heibeck's on Danbury Road, and I never turned down a cone from Stew Leonard's, but we were a Carvel family. Cookie Puss for birthdays, and soft serves for regular days. Their options are what some may call basic, but I call classic. My preference: vanilla ice cream and don't be stingy with those rainbow sprinkles, served in a cone and devoured while sitting in the car in the parking lot with my dad on visits to Connecticut.

But you can find Carvel in NYC, too—you'll find the Manhattan one on John Street in FiDi, and a rep tells me another is opening soon in Herald Square. I'm also told that we'll be seeing Carvel trucks all over soon (I've spotted plenty in Brooklyn already). But for the true experience, head to Metropolitan Avenue in Ridgewood, Queens, where you'll be able to order up your ice cream at one of their beautiful retro shops. 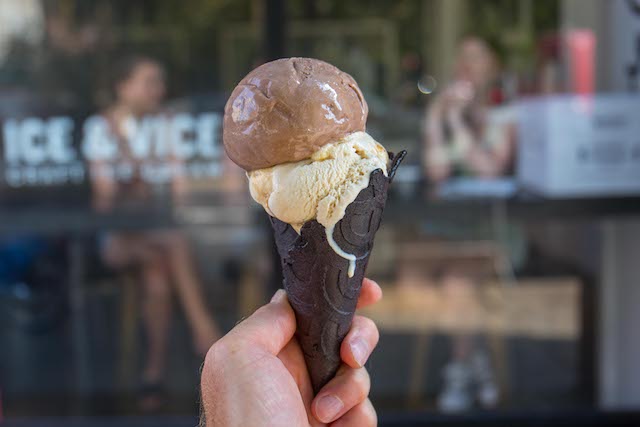 My first taste of Ice and Vice was at the 2014 Vendy Awards, the year Ken Lo and Paul Kim took home Best Dessert honors for their Long Island City pop-up. I instantly fell in love with their lovely smooth textures and the stunning intensity of their flavors, and five years, four shops/kiosks, and hundreds of scoops later, Lo and Kim still know how buckle my knees, every goddamn time. In fact, sitting on that rickety bench outside their East Broadway flagship, on any night, at any time of year, and tucking into a double scoop of literally anything in the store, has been one of the great pleasures of this part of my life. And if the more experimental offerings like Colt .45 (toasted barley, chicory root, spiced mole) or Ants On a Farm (raisin, celery, gianduja chocolate chips) aren't your thing (though both of these were excellent), Ice and Vice also makes, for example, the staggeringly good Basic B, which is the single best vanilla ice cream you'll ever eat in your life.

Located at 221 East Broadway, Times Square, 27-20 Jackson Avenue in LIC, and 55 Water Street in DUMBO's Time Out Market (which is currentely shuttered by the DOH); iceandvice.com

Chocolate chip is a flavor that’s all about balance. Way too many ice cream makers (I'm looking at you, Haagen Dazs) get it wrong: the chips are way too chunky or plentiful, and wind up overwhelming the vanilla. The Baskin-Robbins version, which is one of the older varieties, isn’t really made up of chips, but rather speckled flakes that dissolve in your mouth. Their vanilla is creamy but not too dense. Combined, it's the art of sweet and bitter. 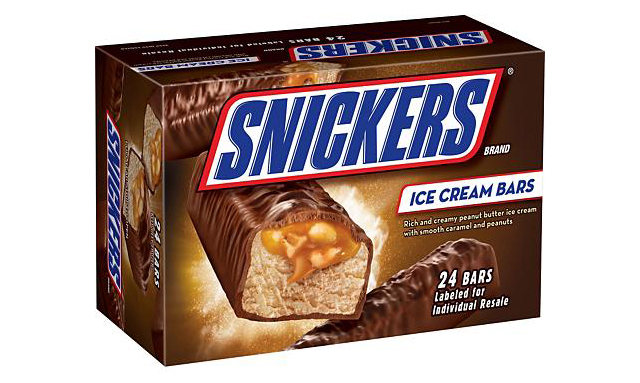 The perfect summer ice cream treat is always a few yards away, nestled in a cardboard box at the bottom of a bodega freezer. For $2.50, the Snickers Ice Cream Bar is a nostalgic treat whose flavor and consistency have not diminished over the years (I'm looking at you, Nutty Buddy). It's crucial that you give it at least two minutes in the humid air before opening—the caramel and ice cream need time to wake up and talk to each other. Yes, the chocolate will melt a little, but that's what must happen to properly coat the whole peanuts that still surprise you mid-bite. There's no need to worry about finishing a whole "pint." Once it's gone, it's gone. Damn.

At your local bodega

Is there any better summer activity than plunging a warm spoon into a cold carton of Phish Food? No, there is not. I say this not as a fan of Phish (they're fine), but as a true believer in the idea that Ben & Jerry's is operating at a level unparalleled in the ice cream landscape. You could spend years spelunking for cookie dough from every store-bought ice cream container in the country, and you still wouldn't find bigger or better slabs than Half Baked's. Sure, pairing those gobs with chunks of fudge brownie might be audacious, but we're talking about heavily sweetened milk fat here; there's no need to be understated. Ben & Jerry's has three Manhattan locations, and pints can be found in the freezer of pretty much every bodega—just be sure you trust your supplier.

At your local bodega 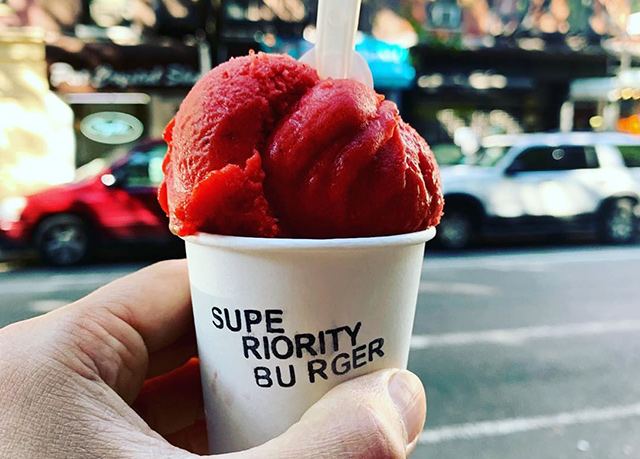 We ice cream obsessives are a pathetically judgmental lot — like a pre-diabetic Magic Hat, sorting people by their regular spots—“Oh you love Van Leeuwen’s Earl Grey? Of course you do, new to the city?” or “Yeah, I too loved Morgenstern’s, back when it was on Rivington. In 2016.”

To those who share in the pathology, I present Superiority Burger’s happiness-inducing gelato and sorbet selection. It may not be obvious that a vegan burger joint would make some of the city’s richest custard bases or boldest flavors, but there you have it. Yes the burgers are great, but the ice cream is near perfection. You can choose to get just the gelato or the sorbet, but I prefer to get both, one on top of the other, in a perfectly sized small cup—just enough for dessert, not so much as to induce insulin shock. Best of all, the flavors rotate regularly, and there’s only ever one of each, so there’s no FOMO, just the deep need to go back again and again. Keep it like a secret.

Located in the East Village at 430 E 9th Street. 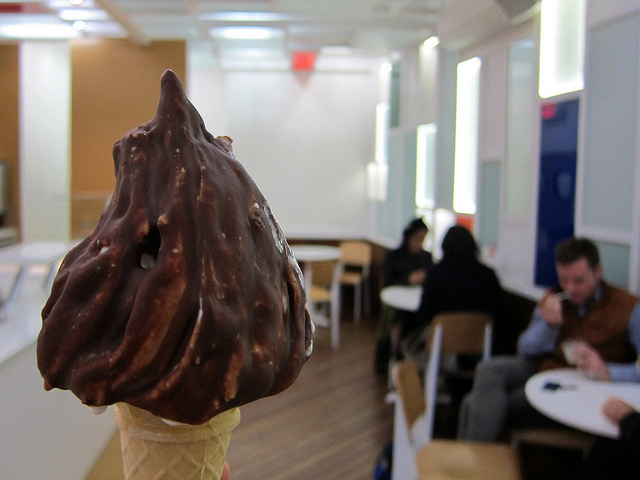 Big Gay Ice Cream has perfected soft-serve ice cream, and their vanilla sings with the right amount of sweetness that sets the stage for whatever toppings you want. My favorite cone is the (controversially-named) “Salty Pimp." First, a wafer cone gets some dulce de leche and sea salt and then is filled with vanilla ice cream, before being covered with more dulce de leche and, finally, dipped in chocolate. The combination of sweet and salty flavors, crispy and smooth is an indulgent explosion. 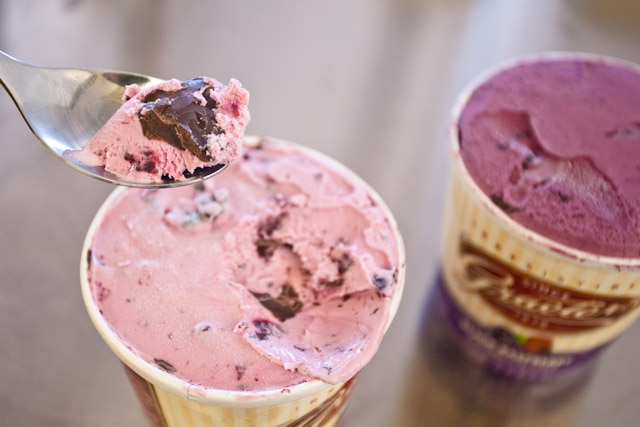 Six years ago, Ohio ice cream institution Graeter's invaded New York City, by way of Fairway. It has been both a blessing and a curse for me, because their time-consuming "French pot" method of making ice cream results in rich, dense ice cream that has no peer amongst freezer aisle brands. They also hand pack the pints! My particular favorite is the Black Raspberry Chip, which is made with black raspberries from Oregon and chocolate chunks that you can actually bite into.

You can find Graeter's in many NYC stores, including Fairway, Whole Foods, and Gristedes.

Black Sesame, one of the most classic Chinese desserts! 🍦🖤 [📸 by @scrumptious.sf] #chinatownicecreamfactory

A post shared by Chinatown Ice Cream Factory (@chinatownicecreamfactory) on Oct 9, 2018 at 6:54am PDT