Gothamist at The Joy of Sake 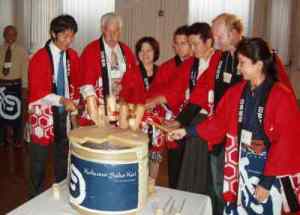 Despite years of sake drinking experience at many of New York City’s finest izakaya ranging from the rarefied Sakagura to the funky yakitori spots on St. Marks nothing could have prepared us for the Joy of Sake. Hordes of revelers gathered in the Puck Building last week to sample more than 300 hundred sakes, many unavailable in the U.S. Just because of the sheer variety of rice libations on offer, the three-hour event was overwhelming, although it did eventually take on a somewhat rosy glow.

The evening's festivities began with the ritualistic breaking open of a sake barrel. Dignitaries with wooden sledgehammers encouraged everyone to chant “Ichi, ni, san,” or “one, two, three,” and then raise their glasses in a hearty cry of kanpai. And then it was off to the races, or rices as it were. With so much sake on offer we quickly determined that the best course of action was to head to the seventh floor and begin sampling those that are unavailable Stateside.

As with the entire event, they were arranged by daiginjo A, or a rice polishing ratio of 40% or less; daiginjo B, 50% or less; ginjo, 60% or less; and junmai, 65% or less. The percentage refers to how much of the rice grain is left after polishing. In general, we prefer the delicate, aromatic daiginjos, which have a complex flavor often with such fruit notes as melon and peach and sometimes hints of anise. 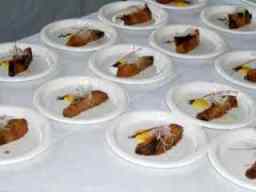 Each bottle had a white tasting cup with concentric blue rings on the bottom in front of it. Japanese sake tasters use this pattern to evaluate color and clarity. They also use the cup to taste the sake. Thankfully, those were not the ones used for tastes at the event. Gothamist says thankfully because by the end of the night there were a lot of dudes acting like they were in a Japanese version of Animal House. Each guest was free to dispense tastes of each sake from a device with a squeeze bulb into their wee tasting cup.

Despite the fact that we were given a listing all of the sakes, we found only one of our favorites on the list, Yumewa Masayume, or Dreams Come true, a classic daiginjo in the A category. That’s not to say that we didn’t find some new favorites. Although for some reason we found nothing particularly memorable about the sakes that aren’t available in the States. 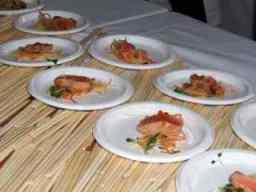 Before everyone starts deluging us with comments that we’re sake snobs, let’s be clear we enjoyed them, but no one particular bottle stood out. And it's not because we were blotto either, as the non-U.S. sakes were our first of the night. Perhaps we tasted these unavailable varieties with a closed palate as a sort of defense mechanism. Then again, it may also have something to with the fact that all the sakes were served at more or less the same temperature, which was sorta warm. As any sake lover knows, superpremium varieties should be served cold to cool for optimal flavor.

One thing we did find on the seventh floor of the Puck Building with its wonderful views of setting sun was some much needed, and tasty, sustenance, including Riingo’s miso-cured salmon with green papaya and daikon and Lan’s simmered pork cheek with foie gras mayonnaise. The latter had a wonderful melting quality thanks to hours and hours of cooking in soy, sugar and mirin, among other things. Other standouts among the edibles include Matsuri's buta kakuni, or slow-cooked pork belly. Come to think of it Lan's pork cheek was a new-fangled take on this classic dish. 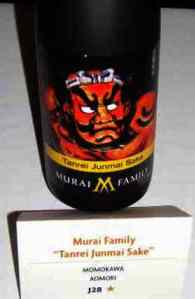 After a probably five or six tastes on the seventh floor, we soon realized that it would be impossible to taste every bottle and hit upon the strategy of asking the JOS volunteers for recommendations and restricting our tastes to those sakes whose name tags had silver or gold stars, denoting awards from a panel of tasters.

Back on the first floor we hit pay dirt with this starstruck strategy. It led us to Kizakura Daiginjo from Kyoto, a light, fragrant daiginjo. If you guessed that the bottle with the fierce fellow pictured here is not a light sake, well then pour yourself a masu. We're not sure if it's true, but in our experience bottles with demons, skulls and such are usually high-end dry sakes. It certainly proved to be the case with the Murai Family “Tanrei Junmai Sake.”

Somehow we thought that spending a day rereading Philip Harper's comprehensive guide The Book of Sake would prepare us for JOS. Evidently it will require months of training, perhaps even a year, but we're prepared to take one for the team.