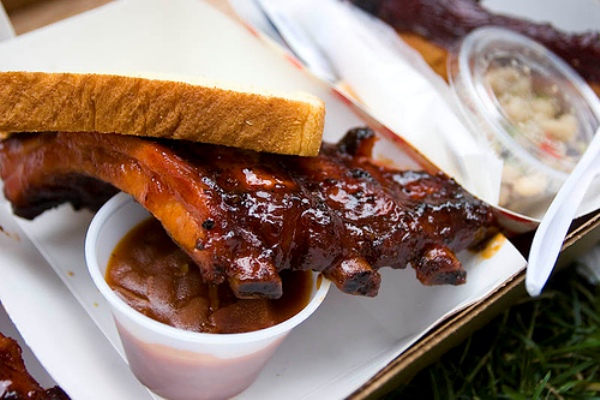 Down at the Big Apple Barbecue Block Party Sunday it sure seemed that everybody was having a grand ole' time. It seemed bigger than ever, with people spilled into every nook and cranny of the park, filed into a long row of picnic tables on Madison, and splayed out on to the sidewalk everywhere else. Our group was made of up veterans of the previous four events, had the lay of the land and knew many of the returning players. Everyone had an opinion, but when all was said and done, we enjoyed a delicious day of barbecue. 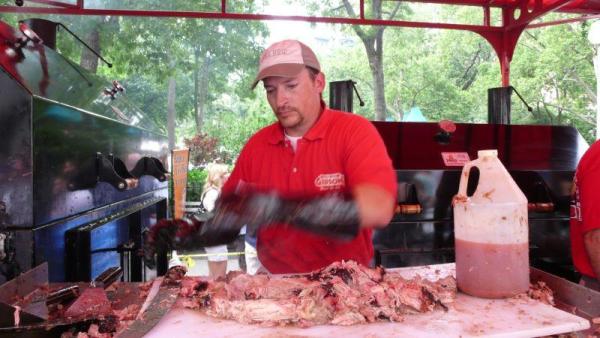 The barbecue baseline in NYC has expanded rapidly in the past few years, and now includes Blue Smoke, Dinosaur, & R.U.B., among others. We learned at the seminar we caught with Jeffrey Steingarten, Ed Levine, Lolis Eric Elie, and moderator John T. Edge, that NYC has built a mighty fine circuit of reliable joints on this here island. In the seminar tent, quality spots like Blue Smoke and very promising newcomer Hill Country got namechecked, LA got dissed, the portability of the pit was discussed, and Steingarten essentially proclaimed that only the Southeast has a currently existing, solid culinary legacy. More gems from Jeffrey came courtesy of the opening General Manager of Blue Smoke who related a tale of an early visit he made. He observed everything in copious detail and forwarded a “laundry list long than most people's arms” of things the restaurant was doing wrong. Without missing a beat the retort came to the effect that “it worked and turned into a great establishment didn't it?”

More analysis and photographs after the jump! 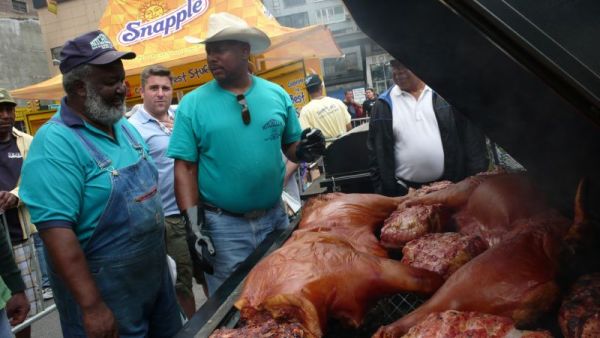 So what about the eats? Just what you would expect: tons of it, much of it very good, a bit of it superlative and various personal tastes helping to choose favorites. As one chomper put it, "it sounds cliché, but when you taste everything side by side, it really illustrates the differences in the regional barbecue styles." The Mitchell's vinegary pork sandwich tasted nothing like the Big Bob Gibson one and the Rack and Soul "candied" ribs were entirely different from the Jake's Boss BBQ (sauce didn't seem tomato based at all on that one). We liked the Salt Lick sausage much better than the Southside, as it was spicier, juicier, and the casing "popped" more when you bit into it."

Plate Notes:
The beefy Southside sausage was wonderfully tender and assertively enough spiced without overwhelming the meat. The aforementioned sausage was served on the brisket plate at Southside, along with onions, pickles, and cheese (Colby ?) just melted by the heat. It was hard to top and the secret seemed to be that it was made with the family love of three generations of Bracewell's all in attendance and working. The served a spicy and runny sauce was on the side along with a perfect slice of county white.

Mitchell's sandwich was a thing of beauty. Whole hog in all its greasy goodness, slow roasted and chopped up with all the body fat worked in, dash of vinegar to balance. Fat that remains attached to the skin and is crisped up for those in the know enough to ask for it. Served with the day's best coleslaw (the vinegar dressing is key).

Chris Lilly and his team at Big Bob Gibson turned out some amazing pork shoulders. Moist, deeply porky with great smoke flavor, they contrasted nicely to the lightness of the Mitchell sandwich. More along the lines of what most people look for in a pulled pork sammy. Great machete show for those waiting in line as well.

The 17th Street Bar & Grill had the days longest lines formed for one of two places offering baby back ribs. Tender and just pulling from the bone, they were really good, but not worth the line for another round. Others clearly felt very strongly about them.

In the solo offering department, the day's only beef rib came courtesy of Hill County and pitmaster Robbie Richter. Heavily coated with cracked black pepper and boasting a gorgeous smoke ring it was a brontosaurus sized treat that has many looking forward to their first visit to the newly opened spot.

While there were admirable desserts – fried pies from Stehling Brothers were notable & Blue Smoke items solid -- it was side dishes that were lacking. Even though one topic of the seminar mentioned above was about how vegetables as a whole are eaten more in the South at “Meat + 2 sides” or “Meat + 3 sides” restaurants, there was nary a collard green in site at the festival. More than one person remarked that they could use some vegetables before invariably taking another bite of meat something. That being said, special notice is due to the only official side dish on the menu, the criminally overlooked Brunswick stew from Proclamation Stew of Virginia. On any day that did not include this much smoked carne, the slow-cooked chicken, vegetable and bean stew would not have been as criminally overlooked.

Other notes:
Absolute Must Have - Bubba Fast Pass: crucial to not spending your day in too many lines. Almost no wait more than a few minutes at any booth at any point during the day. One downside: You couldn't buy some drinks (like the strawberry lemonade outside of Eleven Madison Park) and other items with it.

Most Efficient Strategy - Small Group Scatter: The event is best tackled in groups, get your people and some Bubba Fast Passes, (one per 3 or 4 or even 5 people) then divide and conquer. Splitting up and regrouping allowed for maximum sampling and minimum line waiting for everyone.

Best Accessory - A Cardboard Box: essential to carry your food and beverages.

Nice Guy Award - Ed Mitchell: all while producing superior product, the guy was walking people around his sizable pit area on 23rd and Madison, conducting jovial and engaging discussions and stacking.

Surprise of the Day - Excellent Music: the soundtrack of southern favorites could not be topped.

Thing That Got Missed but Shouldn't Have - Bourbon Bar at 11 Madison Park: With a couple generations of Van Winkle's answering questions and sharing cocktails that could have been a great place to kill some time.

Want more on the event ? Go see our friends at Savory New York, they have interviews with many of the pitmasters mentioned above. Off The Broiler has some excellent coverage, both from Friday night's warm up and Saturday at the event. You can be sure Ed Levine will have some coverage up this week as well.

If you were there tell us which pitmaster produced your favorite barbecue and share some photos if you have them -- tag your flickr photos with Gothamist.