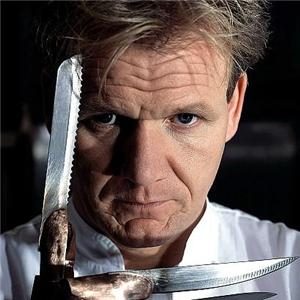 Celebrity chef Gordon Ramsay doesn’t give a damn about you, your girlfriend, or the special Valentine’s Day dinner you had planned – so drop your fork and get the hell off his set! That seems to be the way things went last Thursday night when diners at New Jersey’s fancy Hannah and Masons restaurant were summarily evicted – mid-meal – to facilitate production on Ramsay’s Kitchen Nightmares USA series. No matter how romantic the rabble, it just wouldn’t do to have them cluttering up Ramsay’s frame – one only hopes the cameras were rolling when the guests were asked to leave.

When making reservations for V-Day, Hannah and Masons had informed couples about the TV production and said they should be prepared to have their experience immortalized on the small screen. Things turned out quite differently, and while some guests were told to go, other diners didn’t even make it inside to begin with, arriving for their reservation only to be turned away. John and Dana Lohn told The Star-Ledger about the nightmare:

When they showed up for their 8 p.m. reservation, the restaurant was cordoned off, they said. A 20-something production assistant tearfully told them that all reservations were canceled, and begged them not to yell at her. The Lohns could see Ramsay through the window, the restaurant illuminated like the set of a movie.

Like a Hallmark adaptation of Oliver Twist, with the Lohns cast as the ragged, unwanted urchins who can’t even get in to ask for another serving of Ramsay’s gruel. Calling the restaurant the next day, the manager told them they “had no idea how bad things got in there” and then hung up without apologizing. A publicist for FOX, which is broadcasting the series here, says “it was in the best interest of the customers to close the kitchen down.” Before Ramsay shivved them.