Gobbling Up Halloween Around NYC 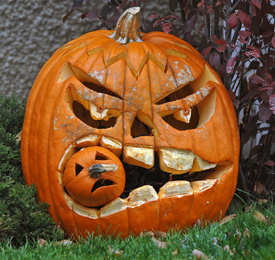 Besides the sickening amount of mass-produced prole candy available this time of year, there's also an abundance of higher grade Halloween eating and drinking options. And so it begins; the long, downward holiday flab spiral that reaches its nadir around the first week of January when you have to start leaving the top button of your pants undone. Oh well, no use fighting it; here are some consumption opportunities we've been able to scare up:

Of course, we'll probably just end up doing the usual: Buying a big bag Reese's Peanut Butter Cups to "give to kids," and then eating them silently in the dark while watching The Shining with headphones on to drown out the doorbell.

#baking
#best
#candy
#cooking
#deal
#dessert
#eating
#food
#halloween
#ideas
#new york city
#nyc
#restaurant
#specials
#to do
Do you know the scoop? Comment below or Send us a Tip