The Hudson Yards mega-development has lost a Meyer but gained a Momofuku, plus a slew of other celebrity chefs and a giant food hall dedicated to the cuisines of Spain. Dining plans for three of the 18 million square foot "new neighborhood," as it's being called by developers Related Companies and Oxford Properties Group, will include many big name restaurateurs to anchor the dining and nightlife amenities.

Danny Meyer was originally slated to open a food hall concept, but he's been replaced by chef José Andrés, who'll operate what the Post is calling the "Spanish Eataly." Press materials for the forthcoming concept—which will be located inside 10 Hudson Yards under the High Line—refer to it as "a sprawling 35,000-square-foot space that will be the ultimate gathering place celebrating all things España" and a "Spanish culinary extravaganza...a dynamic, all-day, indoor-outdoor destination for Spanish food, drink and culture."

Acclaimed Spanish chefs Ferran and Albert Adrià will also be part of the food hall, which will include a "world-class tapas bar" in addition to imported items including Spanish jamon and olive oils.

The prolific chef and his company, ThinkFoodGroup—which will operate the food hall—appear to be doing well after settling lawsuits with the Trump Organization after Andrés pulled the plug on a planned Spanish restaurant in a forthcoming Trump-owned hotel in DC, calling it "impossible" to be affiliated with Trump. 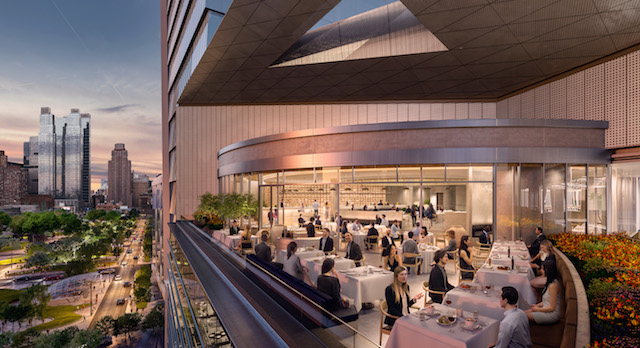 David Chang also has plans to open a large new entry into his Momofuku fleet inside the development. There are plans for an over 5,000-square-foot new restaurant with globally-inspired cuisine from the United States, Japan and Korea. The restaurant is slated to include both a sit-down restaurant and a "new takeaway concept" that could piggyback on the success of Chang's fast casual fried chicken fleet Fuku and his burgeoning delivery-only service Ando. "It won’t be like my other restaurants," Chang promised the Times.

A Foodies Guide to Hudson Yards by Nell Casey on Scribd

#david chang
#hudson yards
#josé Andrés
#thomas keller
#original
Do you know the scoop? Comment below or Send us a Tip