Getting Lucky in Sunset Park 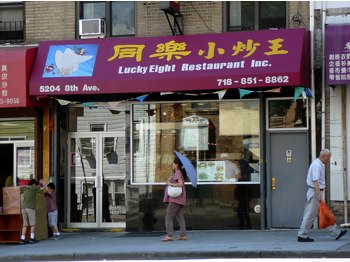 Brooklyn’s sprawling Chinatown, concentrated on 8th Avenue from 62nd to 42nd Streets, has an array of bakeries, dim sum houses, noodle take-out shops. Mixed into the neighborhood are some Malaysian restaurants, Vietnamese sandwich shops, and even a branch of the chain Hong Kong Supermarket. Lower Sunset Park rents and smaller, rentable square footage make it ideal for a crop of modest, decent restaurants. Because it’s less touristy than Manhattan’s Chinatown, it is also a great area to get lunch, dinner, or both in a less frenetic, and less theatrical, setting.

Peter Meehan’s $25 and Under review of Lucky Eight a little more than a month ago hit the nail on the head: there are a lot of surprises here, starting with the fish tanks up from containing things like tiny, live sweet shrimp. In the afternoon, start with broth and choice of noodles with the Hong Kong Style Noodle Soup for just 80 cents. From there, at an 80 cents extra per piece, you can mix and match added ingredients; a huge bowl of soup with rice noodles, a few shrimp, squid, fish cake, and vegetables, for example, might end up costing you less than $6.

On a busy night, the food comes out to the table fast, in a haphazard order. Appetizers like Shrimp “Medallions” ($4.95)- six shrimp balls with a kataifi-like coating and plum dipping sauce- are a good way to go. Also good is the Beef with XO sauce ($9.95), which arrived with huge sections of sautéed winter melon, cut on the bias. Most tables order huge, steaming side plates of garlicky Chinese broccoli.

The so-called “signature dish” of the restaurant, however, is Pride of Lucky Eight ($14.95). It’s a cephalopod and onion family stirfry, containing garlic stems, Chinese celery, garlic chives, baby squid tentacles, slivers of abalone, and dried scallops. It’s an incredibly tasty collection of similar ingredients; each has its own assertive flavor that shines through the light sauce. Pride of Lucky Eight looks like a bright collection of stems and shoots, and everything has been julienned to roughly the same size; as a study in green, it may look healthier than it is, but it’s damn good. Like Meehan wrote in his review, each ingredient adds a slightly contrasting texture. If that doesn’t do it for you, there are about 150 other items on the Lucky Eight menu to choose from.