Get Your Tiki on at King Yum 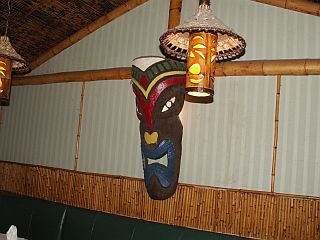 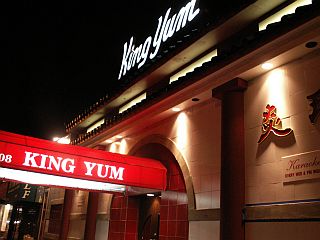 The first thing that springs to mind when one thinks of Chinese cuisine in Queens is Flushing, home of everything from top-notch dim sum halls to food carts and restaurants trafficking in the the lamby delights of Xinjiang. But there exists another type of Chinese food in Flushing that’s been around since the 1950s. It’s old school Chinese-American, which when done right is both bad and good. If you’ve ever dug into fried chunks of pork slicked with sweet sauce or found yourself regretting eating the last of the greasy but huge fantail shrimp you see why we say bad and good.

While we have fond memories of a suburban childhood spent eating such classics as wor shew opp, Gothamist usually doesn’t seek out this kind of grub. But when you combine this food with classic Polynesian drinks with retro Tiki décor that has hasn’t changed since the 60s, we start to get excited. Which is exactly how we wound up eating dinner at King Yum last night. 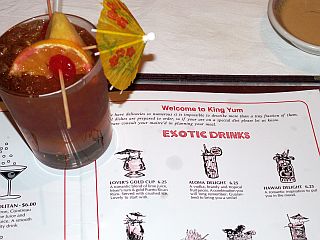 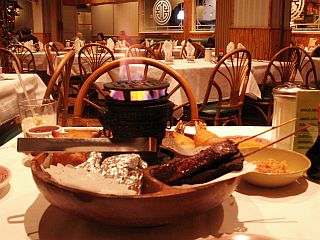 Entering this 54-year old restaurant is like going back in time. If you're unnerved by the culture shock, order up an exotic cocktail. We decided against the Mona Loa, which the antique menu copy described as "A hot time for those who drink it." As a general rule, we avoid flaming drinks, so we went with a classic: the Mai Tai. Besides, one open flame at the table was plenty. As you can see, King Yum's pu pu platter featured beef on a stick as well as some great spare ribs. There were also tasty little triangles of shrimp toast. Fantail or not, Gothamist has never been a fan of the shrimp that was entombed in a greasy batter that seems to have been inspired by corn dogs. Nevertheless, we enjoyed our pu pu platter as we listened to the sterno sizzling away in the center and sipped on our second drink, a zombie. 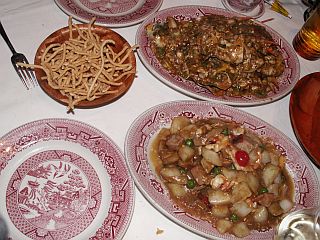 Gothamist can probably count the number of times we've ordered chow mein and have only a vague memory of lots of celery and water chestnuts in a gloppy sauce. King Yum's rendition was lovingly authentic and had plenty of bits of pork and shrimp. Note the cherry on top and the accompanying bowl of chow mein noodles. Gothamist also ordered crabs in black bean sauce, a hearty serving of crustaceans slicked with a sauce packed with a ginger, garlic and ground pork. It was worth getting messy to pick the sweet bits of crab flesh out of the shells. No sooner had we finished devouring the crab and our waiter Tony brought over our second hot towel of the evening. Now that's old-school service.

#chinese
#flushing
#food
#kingyum
#queens
#restaurants
#Xinjiang
Do you know the scoop? Comment below or Send us a Tip