Our latest installment of Quick Bites brings us to Uncle Boons Sister, the successful spin-off from a Michelin-starred team.

THE VIBE
Uncle Boons has been a hit since it opened on Spring Street more than four years ago, as the combination of beer slushies, goofy old monster movie posters, and a long list of excellent, innovative Thai dishes proved to be the perfect match for its Nolita location. So much so, in fact, that it also became one of those great restaurants that are always so crowded you wind up never really eating there.

Enter Uncle Boons Sister, Matt Danzer and Anne Redding's new "Thai take out" place around the corner from their mothership, where you can feast on that big-flavored, MIchelin-starred cooking without waiting to be seated or shouting to be heard. True, for those of us dining on premises, Uncle Boons Sister isn't exactly what you'd call luxurious: the chairs are short backless stools, the too-small tables are crammed together in the awkward dining room (there's a little more room within the new sidewalk seating area). But unlike Mr. Donahue's, Danzer and Redding's predecessor in this tiny space, this is very much a counter-service joint, and you will likely be in and out in under 30 minutes anyway.

As at Uncle Boons proper, Sister is filled with vintage Thai keepsakes and kitsch, from formal portraits to an angry taxidermy chicken. The menu is light-boxed on the wall alongside faded food photographs (this is more for effect than real guidance, which the pro-staffers will happily help you with). There are bags of snacks and candy for sale to supplement take-out orders, and refrigerated, pre-made, grab-and-go salads, none of which I tried. 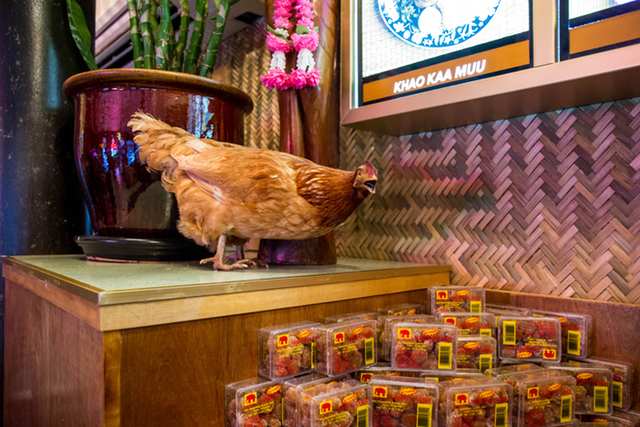 THE BITES
The Uncle Boons Sister menu is short, and most of the dozen or so dishes are classified as "mains." Almost everything I ate over the course of two large meals was very good, most notably the Khao Kaa Muu, a hefty hunk of pork shank marinated in soy and anise and so soft you can easily pull off bite-size pieces with your chopsticks. The mustard greens add a nice bite to the plate, and the orange chili vinegar dipping sauce is ridiculously addictive. The Laab is also terrific, made with crisp fried chicken "nuggets," cucumber slices, greens, and rice powder, all served over sticky rice. This was by far the most pleasantly spiciey dish I tried.

The Phat Thai may seem like an overly-safe order, but the five head-on prawns laid in a row on top bring a lot of life to this party, and the well-seasoned rice noodles below are comfort food at its finest. Phat Bai Horapha is a basic stir fry dish, with tender bits of beef short rib and plenty of peppers soaking in a sweet-ish sauce. The egg that comes with, by the way, is perfectly fried in a way I can't even understand, with its runny yoke and chewy, deliciously-burnt whites.

The only entree I wouldn't get again is the Puu Phat Pong Kari, a crab omelette that couldn't stir any excitement, even after pouring on the accompanying yellow curry sauce.

And unless you're one of those weirdos who doesn't eat ice cream when the weather cools down, get the Rama Cone for dessert, whether you've had dinner here or not. A play on the classic King Cone, this portable version of Uncle Boons's famous sundae comes wrapped in cellophane (so you can throw it your freezer if you're bringing everything home), and is a beautiful combination of coconut gelato dipped in white chocolate, then coated with candied peanuts and toasted coconut. 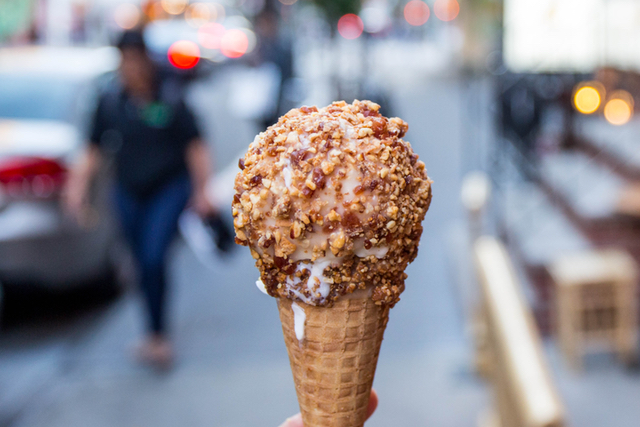 THE VERDICT
Uncle Boons Sister is a fun, super-casual spot where you can get some very good food for under twenty bucks. Definitely added to my Nolita shortlist.

#nolita
#quick bites
#uncle boons sister
#original
Do you know the scoop? Comment below or Send us a Tip