Get "Very Very Beautifully Drunk" On These Whisky Macs 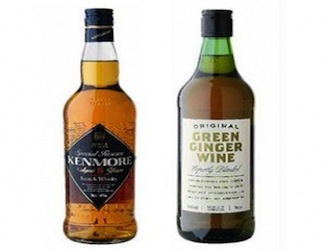 In The Unabridged Journals of Sylvia Plath, she writes from her hangover bed in February 1956, "Last night I got drunk, very very beautifully drunk... I drank steadily the goblets with the red-gold Whisky Macs, one after the other, and by the time we left an hour later, I felt that strong, silted-up force that makes one move through air like swimming, with brave ease."

Whisky Macs, also known as a Whiskey Macdonald, is just 3 parts Scotch whiskey, and 2 parts ginger wine (specifally green ginger wine) all mixed up and served in a wine goblet. You can also serve it hot, just add some boiling water, or if you reject purism then go ahead and cream it. But this is a good warming winter drink—even if you don't do the hot version—so leave the rocks and chilled glasses out of the equation.

According to Musings on Cocktails, the outcome is all in the Scotch:

"I really recommend not using something with peat: a smokey scotch, especially one from Islay, will overpower the ginger wine, and clash horribly with the spiciness of the ginger. Plus a ginger wine like Stone's is rather sweet, and most Islay scotches won't benefit that much from being overly sweetened. Personally, while a blended malt is cheapest and works well, I prefer it with a single malt: the Balblair 97 vintage actually works well, or even a Japanese single malt such as Yamazaki 12 year, with its' honey notes. The Balblair has a nice smell of lemon and apricot, with tastes of raisin, spice and vanilla that pair nicely with the ginger wine. Even something such as Glenmorangie will work well in this cocktail."

Ginger wine is "often fortified by being blended with brandy (cognac)," and you can find it all over... or make your own at home.