Jacob’s Pickles was an instant Upper West Side hit when it first opened more than six years ago, bringing first-rate comfort food and a casual cool to a neighborhood long in need of both. Combine that with generous portions, an attention to detail, and friendly, professional service, and it’s no wonder that these guys are still packing in the locals night after night, brunch after brunch.

Now Jacob Hadjigeorgis and his ever-expanding team have opened their third restaurant in the neighborhood, Lucky Pickle Dumpling Co, a fast-casual spot that not only traffics in those namesake crowd-pleasers, it also offers a trio of Asian-style noodles and Sour Pickle Soft Serve Ice Cream. Which, by the way, is refreshing and delicious. 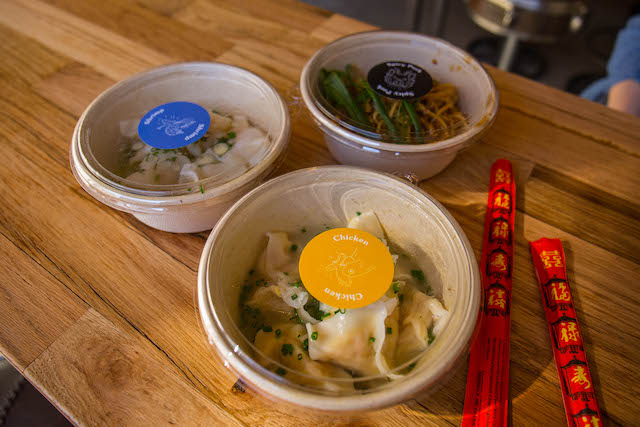 The Lucky Pickle dumplings are fat, roundish, craggy, and served boiled, five to a bowl, with a shallow puddle of broth adding considerable punch to each flavor. We were invited to a tasting this week and tried three of the six varieties, including the bright and sweet Shrimp in Ginger Butter Sauce and the legitimately fiery Pork in 5 Spice Broth.

The Dan Dan Noodles, thick with ground pork, were lively and satisfying and made us want try the Cold Sesame. Under "veggies" you'll find mostly pickles, of course, though they also offer a Steamed Spinach side. A variety of house-made punches and flavored teas provide liquid refreshment. Most important, there are three soft serve flavors for dessert, but really, how can you not get the pickle one? 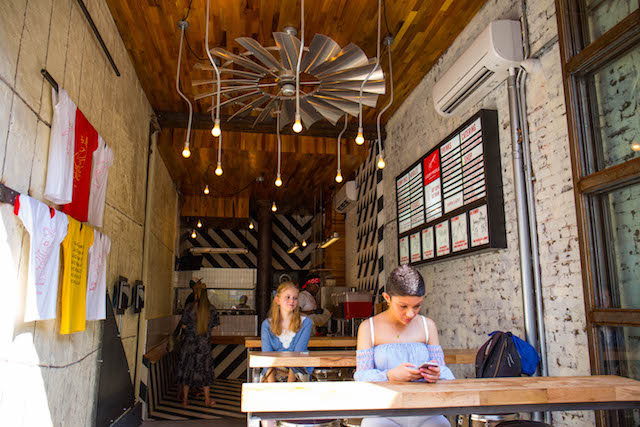 As for the space: it's small. You'll place your order on a touch screen by the wall, then grab a seat if you can at one of the communal tables near the restaurant's open front, where you'll await a text. The process was bug-free when we were there, and it only took a few minutes to get our food. Everything is packaged as a "to go" order, even if you're dining in, which feels wasteful but at least there's a rack above the recycling bins on which you can hang your paper bag if you don't need it to carry stuff home.

Lucky Pickle Dumpling is located at 513 Amsterdam Avenue, right near Jacob's Pickles between 85th and 84th Streets (and an avenue away from the group's other establishment, Maison Pickle). They're open from 11 a.m. to 11 p.m. Sunday through Thursday, and until 2 a.m. on Friday and Saturday.

#jacob's pickles
#lucky pickle
#Upper West Side
#uws
#original
Do you know the scoop? Comment below or Send us a Tip