Our latest installment of Quick Bites brings us to Essex Street for everything AND the kitchen sink.

THE VIBE
There's this block on Essex Street, between Hester and Canal across from Seward Park, that's become something of cheap-eats row. At least a half dozen fairly new counter-service spots have popped up recently all right next to each other, most with benches out front, and from midday until late at night they see a steady stream of customers.

There are a couple of taco stands, a pupusa place, a Grumpy's, a crazy spring roll restaurant that also serves loaded-up cheese fries... but the best of them by far is L.E.S. Kitchen, which opened a couple of month ago by Chinatown native Chris Wong.

Wong is a friendly, exuberant young man, and his L.E.S. Kitchen matches his personality. There's a small bar with some stools, a counter by the front window with some more stools, and either the NBA playoffs on the flat screen, volume up high, or hip hop thumping on the box. Everyone seems to know everyone else, and its unclear sometimes who works there and who's just chilling. BYOB (in brown bags, straw optional) is encouraged.

There's some retro diner-esque signifiers scattered about, like the Marilyn Monroe cosmetics ad, and the Coca-Cola napkin dispensers, but it's not a fully realized design scheme. Like everything else at L.E.S. Kitchen, the decor is casual. You will be comfortable, you will feel welcome, and, if you live nearby and enjoy spending less than $15 on a big dinner, you will likely become a regular.

THE BITES
The L.E.S. Kitchen menu is short and all about sandwiches and sides, but it has enough variety and appeal that even after three meals in one week I'm eager to go back and try a few other items (hello Mac & Cheese Jalapeño Poppers and that Holy Shiitake thing).

Most everything I ate here was terrific in its category, but the biggest standout has to be the Angry Bird fried chicken sandwich, which is both juicy and crackling, spicy as hell, dripping with a mayo-hot sauce mix, evened out by the crisp red cabbage slaw and the acid bite of the pickles. This is excellent, the best such sandwich in the city right now.

Another crave-worthy concoction is the Kitchen Sink, an enormous serving of gloppy cheese fries laden with clumps of roast pork, sliced up rib eye (via Pat La Frieda), crisp and chewy bits of bacon, ribbons of creamy provolone bleu cheese sauce, and a runny-ass egg on top. Pour on the Sriracha for added pleasure, and proceed to inhale. God this dish made me happy.

The L.E.S. Burger is also great, served in proper medium-rare fashion, toppings all fresh and lively (well, maybe the tomato could have used a little more time in the fields), the same potato bun you'll find on Angry Bird doing solid work here as well. I had mine with added bacon, which was a good call. The side of regular fries is sort of ho-hum, but the small basket of crunchy Tots brings some definite personality to the party. 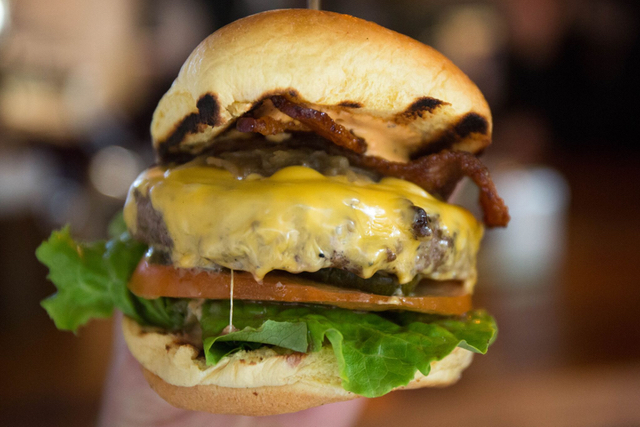 An overly enthusiastic dousing of cheese sauce made the L.E.S. Cheese Steak too much of a mess to really enjoy—the crusty hero, impossible to smoothly bite through, doesn't help matters—but since the key ingredients also play a big role in the Kitchen Sink, this is an easy situation to avoid.

THE VERDICT
Even in a neighborhood jammed-full with good places to grab a cheap, quick meal, L.E.S. Kitchen is a winner. I will be back, and as often as possible... though I do wish Wong would make us something for dessert. After all of the salty flavor bombs, you need a blast of sweet.